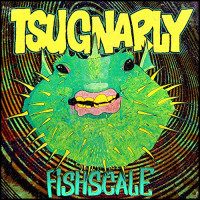 Good surf punk albums can be tough to find. Most tend to stray too far to either direction, either not enough surf influence or too much that it is not really punk anymore. Tsugnarly, out of Melbourne, Australia, strike a great balance between two applying surf sounds to some great punk tunes.

Tsugnarly apply reverb to heavily distorted, pounding guitars that makes the listener feel like they are barreling through the biggest, nastiest waves. The coarsely shouted vocals add another layer of franticness to each song, backed by fast and steady drumming.

"Rip It," the opening track on the album, sets the tone for the other songs; fast and heavy. The first half of the album is closer to straight up punk rock with some slight surf influence. Moon Man really is the turning point for the surf sounds and lyrics to start shining through. Even with this heavier approach Tsugnarly keeps some of the lyrical weirdness that other surf punk groups like Man or Astro-Man? are known for with tracks like Moon Man and Whale, the latter being about living inside a whale. "Caliente" is the best track on the album, fully embracing the surf sound for a five minute mostly instrumental jam, the album would be even better if more songs were closer to the same sound.

Tsugnarly’s Fishscale does an excellent job of adding surf vibes to fast and furious punk. The album really catches the feeling of screaming into shore on a giant, crashing wave before coasting to shore. This album sounds like Dick Dale went to a Germs show and liked what he heard.

Donaher: I Swear My Love Is True