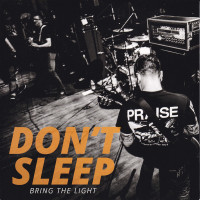 Very Americans were an indie-power pop band out of Harrisburg, Pennsylvania with a release on Eulogy Records produced by J Robbins. It consisted of the type of power-pop found in the late 70s mixed with elements of modern-day emo. Knowing Dave Smalley was a big fan of this style and after some messages back and forth, the band played with Smalley on some shows in Harrisburg. As an encore, together they played some classic Dag Nasty songs which brings us to Don’t Sleep. After finding chemistry during these impromptu encores, originals began to materialize.

Enter Bring The Light, the 3-song debut 7” from Don’t Sleep. Don’t Sleep is a throwback to the type of hardcore Dave Smalley cut his teeth with. The release opens up with the eponymous title track and hands down best song. With a quick intro that you might mistake for Rise Against’s “Black Masks and Gasoline,” the song launches into a minute long posi-core banger recalling all the best the genre has to offer - seeing red in ‘82, truth in identity, and an absolutely stellar two-step inspiring breakdown.

“Lazarus” and “Bloody But Unbroken” comprise the rest of the release coming pretty close to the sound of H2O’s latest. They are proficient songs and sure to be enjoyed by anyone who is a fan of the type of melodic hardcore performed by the aforementioned bands and Dag Nasty’s earliest material. Smalley’s vocals sound more inspired than they have in recent output likely energized by the youthful instrumentation driving the songs. However, while these songs are enjoyable, nothing in these catches one’s attention like “Bring The Light.”

At a mere 5-minute run time, it’s hard to tell if Don’t Sleep are offering enough to stick out playing a tried and true formula or if better left to playing through Dag Nasty’s glory days, but this is a decent start.