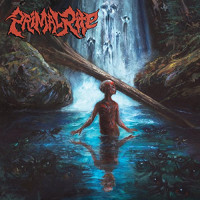 The lines between hardcore and metal have been getting gloriously blurrier in recent years. Bands like Nails, Power Trip, Code Orange, and the rebooted Bloodclot have picked up where the old notions of crossover left off, and collectively amped up and fine-tuned the sub genre, to both critical and commercial success (do I seriously live in a world where Code Orange got a Grammy nomination?).

San Francisco’s Primal Rite is the latest in line to carry this new torch, and their debut full length Dirge of Escapism may not win over any uninitiated, but it is a solid and satisfying recording.

As with most great metal albums of the past, the first track, “Chapter Zero”, is an instrumental overture. The gloomy atmosphere and chugging riffs appear to be an homage to the great Scandinavian metal records of the 80s and 90s.

But once you hear Lucy X, the gender-fluid vocalist, you best ask the children to leave the room. Their howling, morbid voice is fairly low in the mix, almost equal to the manic dual guitars and pounding rhythm section, as well as slightly off-center.

The same mix style continues throughout the album, and that’s a great choice. That technique has been used on underground doom and thrash albums for decades, and this, blended with the song styles, is what gives this album its character.

While aforementioned acts like Code Orange and Power Trip are making their mark by putting metal back in hardcore, Primal Rite is doing the opposite. The former are taking a simplistic hardcore formula, breaking down each element and then tooling the breakdowns, adjusting the time signatures, adding effects, and then sewing the pieces back together.

Primal Rite on the other hand are sticking with great, basic call-and-response hardcore anthems and just layering the metal elements on top. The result is a slightly more traditional sounding crossover record, while no less effective or special. Lucy’s vocals are outstanding and haunting, the guitar work chugs, riffs, and thrashes without ever getting out of hand. I found the drums to be decent, but nothing to stop traffic over.

If you’re looking for an album that can make you simultaneously head bang, circle pit, and summon the dead, Primal Rite’s Dirge of Escapism is what you’re looking for. As debut albums go, it’s great to see a band with their footing so well placed.