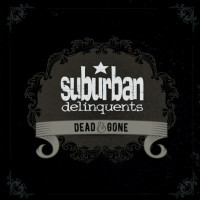 Picking up the new Suburban Delinquents EP was a drunken, impulsive decision. At the end of December, I was wandering around a big show in Detroit in an alcohol induced haze. I stumbled across Sub D while traveling between the bigger stages. The song they were playing caught my ear, and I happened to standing right next to the merch table. That’s how I found myself in possession of a copy of Dead & Gone. I figured they were an up and coming band, but later learned that they go way back. They originally existed in the mid 90’s, but have started playing more regularly now that they’re all back in the same area.

The irony is not lost on me that alcohol played a part in my discovering Suburban Delinquents. Dead & Gone has plenty of songs about drunken, impulsive decisions. “100-Proof Heart” opens with the line “When I die, take me to a place where the Jameson never runs dry”. The band also opted to cover the Jawbreaker classic “Kiss the Bottle”, a bittersweet song about a destructive relationship and choosing booze over love. These tales of wasted nights are also tempered by the wisdom that comes from being older and (usually) wiser.

Musically, Sub D plays straight up, speedy, melodic punk. The lead vocals are raspy and the backing vocals are often shouted. There are plenty of catchy harmonies and guitar leads too. They remind me a bit of fellow Detroit punks Break Anchor. The title track laments lost days and people while acknowledging “We can’t go home again”. It’s arguably the strongest song in a collection of strong songs. The song that first drew me to Suburban Delinquents was “Motown”, and it’s my other favorite from Dead & Gone. It’s got the type of chorus that dares you not to sing along. The city of Detroit itself is a recurring character in these songs.

Dead & Gone has a sense of redemption and second chances, even as it admits that there’s really no such thing. Maybe it’s my old age, but I found myself relating to this EP on almost every level. There’s a certain peace that comes with resignation. While it’s true that you can never go home again, sometimes it’s fun to visit. I’m glad I finally discovered Suburban Delinquents, even if I’m a bit late to the party. Highly recommended.