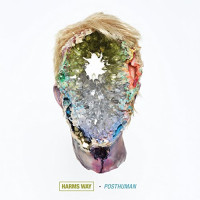 One of the most terrifying moments I've ever experienced at a show was during a Harm's Way set. The band opened with "Scrambled" and right before the intro cinderblocked everyone in the face, the venue lights were purposefully turned off. It was like a blackout riot: people destroying each other, overturning merch tables, and simply trying to survive the onslaught of the band in total darkness.

Which doesn't necessarily trump my first experience seeing Harm's Way, when vocalist James Pligge began the set by donning a ski mask and punching his way to the front of the room from the venue entrance.

It's these types of experiences that give Harm's Way their character. That and their prolific discography. Whichever release you decide listen to, whether it be the primitive-Spazz worship of Imprisoned, to the production-heavy, metallic hardcore of Rust, Harm's Way sounds... dangerous, live or recorded. And this is no different on their latest LP, Posthuman.

Lyrically and aurally, since 2015's Rust, Harm's Way seems to have an obsession with the idea of fusing man and machine. This fixation is most noticeable in the band's decision to include electronic accompaniment in their latest material. It began in earnest on the band's previous LP and continues on Posthuman, both in spirit and in song. Tracks like "Human Carrying Capacity," "Last Man," and "Call My Name" contain the most balanced electronic additions, but they are less at the forefront this time around, unlike Rust. The only track that is completely electronic is "The Gift" and, along with the oddly-subdued "Temptation," these are the only two non-essential tracks on the album.

What is on prominent display throughout Posthuman is Harm's Way's knack for writing absolutely crushing hardcore-tinged metal of the riff heavy, groove-oriented, and unpredictable variety. There are times when it seems like the riff can't get any deeper, then the band somehow pulls the floor out from under you and flattens you with it. Make no mistake: this might be Harm's Way's heaviest material yet, equal parts Disembodied, Dying Fetus, and Bolt Thrower. Tracks like "Become A Machine" and the album closer "Dead Space" will surely inspire wanton and terrifying show violence like the incidents I described earlier - which is unfortunate, but understandable.

Posthuman is a definite step up from the lackluster Rust and shows fans that Harm's Way is continuing their evolution into one of the heaviest bands of any genre.