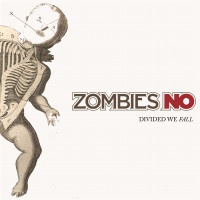 Divided We Fall, the new album from Venezuelan socio-political punk/metal act Zombies No hits hard, fast, and doesn’t really let up after the intentionally mellow (and downbeat) intro. This album is a kick to listen to, but not without its flaws.

One point I think bears noting is that the band is Venezuelan, but currently resides in Paris, France. Considering the over-arching subject matter of the spiraling situation in their home country, the songs and themes on this album seem to be more pressing, topical, and hard-hitting than most of their contemporaries.

The album starts with “Legacy,” an intro track featuring soundbites of English-language news reports and interviews regarding the dire state of affairs for the everyday person living in Venezuala. Accompanied by a somber piano tune, it ends on quite a downer. From there the band rips into “Visions (No TV Announcement)” and, if you’ve got a bit of metal in your blood, you’re going to really like what you hear.

Zombies No takes the tendencies of melodic and skate punk and ramps them up with a healthy dose of thrash: palm mutes galore, wailing solos and, to my delight, some honest-to-goodness double kick drum action is intertwined seamlessly with a plethora of backing vocals and harmonies from what seems like just about every member of the band and different times.

Throughout the album , the band never really lets up. Aside from the intro each song is furiously fast and gets the heart pumping. The closer, “Retrospective,” is likely my favorite song on the album and, as it should, nicely wraps everything up with a bang.

One of the most impressive features of this albums is just how technically competent the songs are in both composition and virtuosity of performance. These gentlemen can play pretty damn well, but put together the intricate parts of their songs seamlessly. It is a joy to listen to.

That’s not to say that all is perfect. There are two sticking points that hold this album down a bit. The first of which is that, while the songs are so well done, they aren’t entirely fresh. Zombies No hasn’t brought much new to the table on this album, even if they’ve further improved their already impressive skills. I just couldn’t point to any single part and and say “wow, that’s something new!”

Well, there is ONE thing that’s new: English lyrics. With their previous releases in their native Spanish , ZN does take a leap here by transitioning into English for Divided We Fall. For the most part, this is OK... even great. But it seems with the transition that vocalist Arnaud Barbu ends up struggling a bit. There a few notable moments when he tries to add some vocal inflections to his singing that seem to be a bit too far out of his wheelhouse- resulting in some uncomfortable warbling. With his not-insubstantial vocal range, this is usually most evident when he drops his voice low and tries to add some vibrato. This doesn’t happen a lot, to be sure, but it was awfully noticeable when it does crop up.

Divided We Fall is a fun record, yet its ceiling is dictated by the lack of anything groundbreaking despite how well it is put together. I wish I could score this one higher, but the fact that you’ve likely heard a lot of this before, albeit in parts, keeps it firmly in the well-above-average range. However, the sheer perseverance of this band, and the heartfelt and intimate storytelling of their songs should put this one just about everyone’s list, at least for a try.