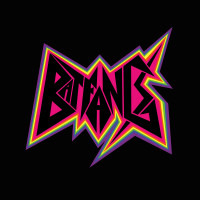 Bat Fangs have riffs for fucking days. If I could stop there and submit those seven words as my review, I probably would, but the fine editors at PunkNews.Org would probably not take that, so I’ll expound. Bat Fangs is a two-piece rock band consisting of Betsy Wright and Laura King, also of Ex Hex and Flesh Wounds respectively, joining forces to explore the power in 80s metal riffage, classic rock beats, and amps that go to 11.

Released on Don Giovanni Records, the eponymous debut from Bat Fangs is incredibly fun. Right from the start, the one-two punch of “Turn It Up” and “Rock the Reaper” give you a perfect idea of the sounds stretched out over the album’s 25-minute run time. The boom-boom-flam of the drums builds the latter, first with guitar alone, then adding bass turning into a spastic guitar solo before dropping out to return to the guitar riff and drum driven final verse. It’s easy to picture these songs finding form in a garage with the aim to fill a stadium.

It’s likely that some will call Bat Fangs a guilty pleasure and write it off as such. Indeed, the songs recall later-era moments from The Donnas’ canon or early career Pat Benatar, in both aesthetic and scope, but these songs contain moments of true heart. Sometimes the underpinnings of the players aforementioned bands pop in. The chorus in “Static” contains a composition that wouldn’t feel out of place on an Ex Hex album. “Mercury” cuts with a mix of jangly indie-pop played with an extra push on the guitar played at one louder in volume.

Bat Fangs is at its best when the band is at its most straightforward. “Wolfbite,” “Boy of Summer,” and “Fangs Out” are sure to inspire a few signs of the horns. This is an album that will sound better in the summer, but is a sugar high of a listen now that may break your winter blues.

Zombies No: Divided We Fall

Mickey Rickshaw: Behind the Eight Ball