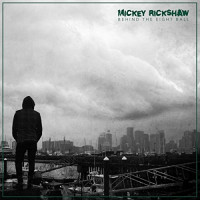 Hailing from Boston, Mickey Rickshaw is a band of many influences. It is easy to compare them to any of the well-known Celtic punk bands, but that would not be a fair assessment. Behind the Eight Ball is an album that encompasses various styles and influences from Australian drinking songs to Mediterranean melodies. Aside from the diverse cultural influences on this album, there are also aspects of ska, street punk, and New England hardcore.

A combination of factors make this album a must buy for fans of any of the aforementioned influences. The band can play with the speed of a skate-punk song, while incorporating the melodies and instrumentation of Celtic music without sounding cluttered (“Rats in Allston” & “Grey Water”). And they can slow down the tempo without losing any grittiness (“Nonprofit Warfare”). Many of the melodies played by the fiddle and whistle may sound familiar, but that’s sort of the point. They are folk songs without being folk songs and because of this, most of the tunes on this album are difficult to get out of your head. In addition to the 9 originals, the band throws in a couple covers (“Destitution Road” & “The Gael”), both of which do justice to the original versions, while making them sound like true Rickshaw tunes. With all of this in mind, what really makes this a great album are the background vocals. Sometimes gang vocals (“Ivy”) and sometimes harmonies (“Monday Warning”), the bevy of background singers definitely enhances each song without overpowering the lead vocals.

What also caught my attention on this album, is that any of the 11 songs can be played acoustically without losing any luster. As a result, just one listen to this album will make you eager catch these guys live. From the circle pits in a grimy dive bar to the quiet corner of an Irish pub, it’s easy to picture the audience singing along to every song. And while Behind the Eight Ball is an amazing album, Mickey Rickshaw is going to continue to grow and I’m excited to see what they put out next.