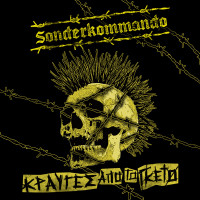 As I have mentioned before in other reviews, punk rock and hardcore are highly politicized in Greece. Sure, just like with everywhere else you will find varying degrees of politicization, but by and large, the DIY way of doing things and leftist sociopolitical ideas are widely held. Athens-based Sonderkommando (not to be confused with a Danish electro duo of the same name) are open about their beliefs and don’t shy away from controversial ideas.

Their debut record (which translates as “Screams from the Ghetto”) is a modern call to arms, codified in three-chord street punk. The intro track with television broadcast clips perfectly sets the mood by identifying ‘the enemy’: the church, the state, the police and the mainstream culture industry, among other usual suspects. From there on, the eight proper songs address themes of urban decay, resistance and revenge. Death in its many forms is an often-explored theme, however the record ends on a high note by championing the punk rock way of life, following one’s heart and actively resisting authority. You can almost hear the crowds of drunk punks and skins, chanting along the chorus, arm in arm.

Perhaps the most powerful song on the album is “Κονσερβοκούτια” (“Cans”), which declares war on all the ghosts of the past, i.e. supporters of the seven-year military dictatorship, Nazi collaborators and Nazis and their modern ‘legitimized’ partisan rendition, Golden Dawn. The song title refers to a method of execution with tin cans ‘favored’ by the Communists during the armed resistance against the Nazis and the ensuing civil war that (further) ravaged the country.

The context of such a song in 2018 perhaps make more sense if one considers that while Greeks are rather proud of their (ancient) history, they often shy away from events in modern times that remain highly controversial and have seemingly left many issues unresolved to this day. The aforementioned Golden Party, for example, has declared itself to the seed of those defeated in WWII and wasn’t shy about its ties to national-socialism until recently.

As far as music goes, there is nothing really anyone with an interest in Mohawks and Doc Martens hasn’t heard before. Think of the Casualties and Total Chaos, only with the politics firmly on their sleeve and you are more or less there; anthemic guitar riffs with a rock and roll quality and a generous sprinkling of simple leads on top, driving bass-lines and verse-chorus-verse-chorus structures. Where Sonderkommando manage to make a difference in an otherwise saturated scene is their fiercely unapologetic anti-Nazi stance that is largely present throughout the record.

As with many bands that have polarized political beliefs, it is often debatable as to whether Sonderkommando’s lyrics will reach crowds beyond the converted, however with the world seemingly taking a few steps to the far right, their rhetoric is becoming increasingly relevant. He who forgets his past is doomed to repeat it and all that, right?

The Dwarves: Take Back the Night