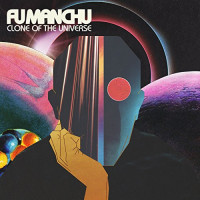 Clone of the Universe, the new album from Fu Manchu, is a tale of two halves. Released on the band’s own At The Dojo Records, the songs that make up side A are exactly what we’ve come to expect from these stoner rock stalwarts. After all, this is the bands 12th album of raunchy, fuzzed out anthems. It’s equal parts 70’s rock and doom and 80’s punk and hardcore. At times it’s slow enough to feel the groove, other times it’s fast enough to skate to. Whatever you want to call it - stoner metal, desert rock or something else entirely, Fu Manchu is foundational to the genre.

All six songs on the first half are standouts. “Intelligent Worship” starts things off and leads to “(I’ve Been) Hexed”, the most immediately catchy track on Clone. “Don’t Panic” and “Slower Than Light” both have memorable riffs and ample guitar licks. “Nowhere Left To Hide” and the title track round out the very satisfying side A. All these songs easily fit right in with Fu Manchu’s already substantial body of work. That is not to undervalue what these guys do. The fact that they have it down to a science doesn’t make it any less impressive. Whether or not you love Clone of the Universe will likely depend on how you feel about the second half.

Side B is one massive 18 plus minute song called “El Mostro Atomico”. A lot of times with very long songs, a band will stitch together a few different songs in the same key. That’s not the case with “Mostro”. It’s one continuous musical movement. It starts slow and builds up steam before before pulling back and gradually building up again. They even manage to enlist Rush guitarist Alex Lifeson to help. He’s a guy who’s no stranger to epics. Stoner metal fans will probably embrace this. (Hell, Sleep’s one hour long “Dopesmoker” has long been considered a classic.) It’s only natural for a band that’s been around for decades to want to try something different. On Clone of the Universe, Fu Manchu finds a good balance. They give fans what they crave along with something more unexpected.