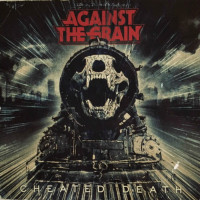 Cheated Death is a bold album title for a band whose oldest members are barely 30, but it also makes sense. Few bands have logged as many miles on the road as this Detroit quartet over the last nine years. I first saw the band back in 2012, and have really enjoyed watching their progress. Their Surrounded By Snakes (2013) LP is a personal favorite. This is Against The Grain’s fifth album, and their first for Ripple Music. Every new record seems to bring something to the table that wasn’t there before.

ATG’s last album, Road Warriors (2015), saw the band take a detour deep into stoner rock territory. While the musicianship and production were top notch, it veered away from their speedrock and punk roots. If Cheated Death found the band at a crossroad, they did what more bands should do: they doubled down on the Motӧrhead. Lemmy and company had always been a huge influence on ATG, but here they really embrace it. Even the album art owes a debt to Motӧrhead’s classic locomotive imagery.

On Cheated Death you’ll hear plenty of Motӧrhead, Zeke and Nashville Pussy, plus they still leave room for the 70’s influences and Thin Lizzy style dual lead guitars they fell in love with on the last record. The first four songs are as strong as anything the band has ever done. The Motӧrhead-esqe title track starts things off on a high note. “Smoke” backtracks a bit into stoner rock territory, but “Sacrifice” and “No Sleep” flat out rip. These are my two favorite songs on the album, and they feature the gruffer vocals I prefer.

“Angels and Devils” is a new trick for these veterans. It starts out as their first attempt at a bluesy ballad before turning into a slow burn dual guitar shredfest. Against The Grain has two very talented lead guitarists, and they get plenty of chances to shine. (You really need to listen to Cheated Death with headphones to fully appreciate it.) “High Heeled Woman” also deviates from the formula and borrows from glam and sleaze. My second half favorites include the blistering “Rolling Stone”, the even faster “Jaded and Faded”, and the contemplative closer “Into the Light”.

Against The Grain spent longer on this album than any of their previous releases, and you can tell by the attention to details. For example, the backing vocal arrangements take a major step forward. They also do a better job of balancing their wide array of influences. I might miss their earlier, more punk friendly flavor, but it’s hard to argue with the results here. Cheated Death is the best Against The Grain album so far. Check it out.