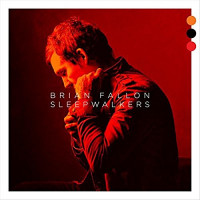 On the eve of the 10-year anniversary of The ’59 Sound, Brian Fallon returns with his second solo album Sleepwalkers. Fallon continues a musical refining and evolution he began with his side projects in 2011, but the improvement of Sleepwalkers over Painkillers is the injection of some much-needed energy and light into this set of songs. Not to assert that Fallon shies from exploring his failures and problems, but the silver linings are visible around these clouds and the trap of obsessive self-interest is mostly avoided.

The album begins with a warm organ and percussive finger snaps on “If Your Prayers Don’t Get to Heaven,” a buoyant tale of devotion and optimism. Fallon vows to “blow a fifty-foot hole through the dark clouds in our room” and that he’s “making a change…starting today.” Already, we’re confronted with a stark contrast to Get Hurt and Painkillers, two albums whose occasionally inspired music was worn down by morose lyricism. Painkillers also often became a slog once the tempo dropped. Early single “Forget Me Not”’s initial impression was muted due to the surprise of a more restrained musical approach than Fallon’s prior work. However, parsing of the lyrics reveals an exceptionally mature request of a former lover to remember the genuine love present in the former relationship while also acknowledging the shortcomings that led to its demise.

Musically, Sleepwalkers trades the distorted aggression of Gaslight for clean guitars, organs, and mandolins and at times bears a resemblance to the Wallflowers. The differentiating factor for this set of songs from the first solo album is a percussive bounce and major chord vitality. “Little Nightmares” is a sprightly take on Elvis Costello, and the title track begins with some E Street saxophone and progresses into a gentle swing. Of all the new musical accoutrements, the organ is the most prominent and glaring addition to Sleepwalkers. Luckily, Fallon’s voice has always been his greatest asset. His gruff growl sounds like New Jersey, embodying smoke stacks and early morning dehydrated sore throats.

However, despite the occasional mirror of adult contemporary, the album is successful due to Fallon’s growth as a writer and his more mature perspective on relationships as he travels further into adulthood. In the past, Fallon has been most successful as a songwriter when he balances the dichotomy of optimistic idealism and fatalistic realism, which were both successfully explored on ’59 Sound, American Slang, and Handwritten. Sleepwalkers improves on Painkillers and avoids most of the problems that tarnish Fallon’s songs, including heavy reliance on cliché and excessive homage to other artists. The touches here are much subtler; in “Forget Me Not,” Fallon references the Beatles with a clever combo of song titles and empathizes with John Fogerty in “Come Wander With Me.” Also, there are hints that this album is a letter to a lost British love since the album contains multiple allusions to British music (the Beatles, Stones, Elvis Costello, Eric Clapton) and culture (football attire, Sherlock Holmes and Dr. Watson).

Ultimately, Sleepwalkers is a vast improvement from Fallon’s most recent solo output but creates a longing for a collaborative effort with his conspirators in the Gaslight Anthem. Hopefully, the upcoming ’59 Sound shows will prove a catalyst to rejuvenating the band.

Against The Grain: Cheated Death