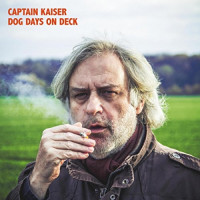 Straight outta Belgium comes this razor sharp debut by beer guzzling punks, Captain Kaiser. Though the band is sometimes billed as pop-punk, I would be more apt to simply describe them as fast punk rock, in the same vein as late Millencolin and early Menzingers. You can classify it however you want, but one thing’s for sure, it’s awesome.

Dog Days On Deck begins with an organ tune as the first track, which threw me off a bit on the first listen because I was expecting some good ol’ punk rock. But on the second time around, it made more sense to me. It invokes images of a new beginning and sets up the anticipation that leads into the next track, “The Pack”, an octave driven rocker that is reminiscent of Sweden’s own Bombshell Rocks. Emotionally charged vocals lead the way to an explosion of guitar and drums and sets the tone for the rest of the album. The energy is often enhanced by background vocals utilized through call and response techniques as heard in “Class Clown” or through harmony style gang vocals in “Tsunami”, among other songs. At times, the higher tones of the lead guitar drives the melody as in “Eskimos and Mermaids”. As a result, the songs remain powerful and vibrant, which perfectly compliments the beer soaked delivery of the lead vocals. The group also pays homage to Billy Bragg, with a great rendition of “New England”, arranged in a way that if you’re hearing this song for the first time, you wouldn’t realize it was a cover song. The only other time the band really strays from the homogenous sound that encompasses most of the album is on the final track. Though it was somewhat unexpected, I was actually hoping the last track would be an acoustic song. It was nice to hear the band in their simplest form, which allows you to appreciate the previous nine tracks even more.

Overall, this is an outstanding debut album. Each track sounds somewhat familiar, yet it never gets old. Every song is full of energy and it’s clear that the band worked hard at constructing these tunes. This song writing formula, though not new or groundbreaking, works well for the five-piece. Quiet when it needs to be, but loud when you want it to be, this album will definitely get a lot of playing time.