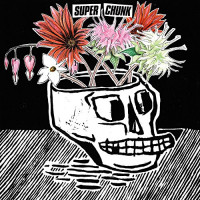 After 30 years of churning out indie rock, Superchunk are rightfully an institution in the alternative music scene. They are both celebrated by mainstream music critics and held in high regard in independent circles. They’ve been one of the most consistent bands since their inception in 1989 in musical output. From their debut self-titled LP to 2013’s I Hate Music, the spectrum of noise found on a Superchunk album does not vary much - sometimes leaning on their punk roots, sometimes to their poppier side, but always through the fuzzed out and post-punk influenced indie rock they have made a name for themselves on.

In that sense, Superchunk’s latest What A Time To Be Alive does not disappoint. With a runtime of slightly over 32 minutes, the album is the shortest and one of their most direct in their canon. “What A Time To Be Alive” kicks things off with sixteenth note hi-hat flits driving a stomping verse into an anthemic chorus calling attention to the perilous political situation the United States finds itself in, with singer Mac McCaughan declaring “the scum / the shame / the fucking lies / oh, what a time to be alive.” Not taking the foot off the gas, the band immediately launches into a minute and a half rager “Lost My Brain.” They repeat this nod to the fast pace punk rock they were weaned on later in “Cloud of Hate.”

In the lead up to this album, much has been made by the band and critics about the lyrical content of the album. There are thinly veiled references to Donald Trump throughout. “Bad Choices” and “Erasure” calls out the white supremacist views of him and his followers. The latter features backing harmonies from Katie Crutchfield. “I Got Cut,” originally appearing on a 7” benefiting Planned Parenthood, wistfully states, “all these old men / won’t die soon enough,” ending with a fret burning guitar solo. “Reagan Youth,” with a clever nod to the band, connects with Ramones-influenced drive and perhaps the most astute observation on the record singing “but to tell the truth / there was more than one Reagan youth.” It underlines that the political messages contained on What A Time To Be Alive are well and good, but a record alone isn’t going to stop Donald Trump. Slack motherfuckers, indeed.

Superchunk have released a record that captures a mood often expressed in our social media feeds and daily conversations. What A Time To Be Alive contains anger, anxiety, triumph, and necessity all filtered through some of the hardest hitting Superchunk material to date. While not much new musical ground is covered here, longtime fans of the band will surely be pleased, and they may just draw in new fans having captured the zeitgeist of our current moment, at least for half the country...