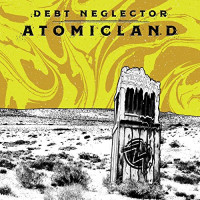 Debt Neglector is a band from Florida that features Alex Goldfarb, who was in New Mexican Disaster Squad, Gatorface, and No Friends. Their debut album, Atomicland, was released on SmartPunk records but could easily be at home on Red Scare or No Idea. While this may be the bands’ debut record, it plays sounds and listens like it’s the bands third album. Sprinkle some Dillinger Four, Off With Their Heads, Banner Pilot, but with the production and clarity of Masked Intruder and The Copyrights, and you have Debt Neglector.

This 12 song album clocks in at about 30 minutes or so, but the songs ebb and flow with energy, poppy moments, harmonies, hooks galore, and will warrant multiple listens to here all the subtleties within the album. It also brings out the best in this style of music, as it is all straight to the point

The Album opens with it’s title track, and it brings me back to the first time I heard Dead To Me. Catchy melodies, gritty and dark lyrics, and singing the chorus the 2nd time I heard the song. “Thoughts and Prayers” is a great example of a band with some tricks up their sleeves. The song opens up with guitar distortion, with acoustic guitar mixed in there as well, while filled to the brim with Ohhhh’s and Ahhh’s over the chorus right out of a Bad Religion session.

The entire album doesn’t stray far from the influences mentioned above, and there is really no need. What Debt Neglector has done is dropped a debut album that they will only build on, and gather more steam, and what I am sure will follow are more fantastic releases. The album came out in 2017, and the only thing bad about that is that I can’t put it on my year end list of 2018.