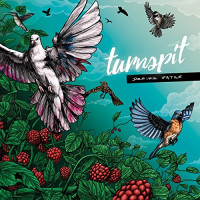 Though you may not be aware, Chicago’s Atlas Studios is an institution in the punk rock community. From establishing a name for itself with Alkaline Trio’s Goddamnit to recordings from The Lawrence Arms, The Copyrights, and The Smoking Popes, chances are one of your favorite bands recorded there. If you swear by Midwestern punk rock, it’s likely this studio has done a lot to shape your musical horizon. That’s why it’s no surprise Turnspit, a band recently championed by some of the aforementioned bands, chose Atlas Studios to record Desire Paths.

Turnspit are a four-piece punk rock band that has been bouncing around the Chicago scene for a couple years now. Desire Paths is their debut album following a handful of singles and EPs. The release will solidify their well-earned place on top of the local Chicago scene. The production value will catch your attention right off the bat. The bass and drums are excellently mixed anchoring the driving force of the album’s 12 tracks. The crisp low-end sound is likely a product of drummer and Atlas Studios’ engineer Dan Tinkler’s production. It gives the album a big sound surely to fill the room in a live setting, while still allowing the guitars and vocals to shine when necessary

Gillian McGhee and Jason Swearingen trade off singing throughout Desire Paths, sometimes sharing vocal duties on the same track. Their voices provide great harmonies with Swearingen sounding like an ever-slightly less gruff version of Off With Their Heads and McGhee finding a solid balance between snarl and melody depending on the needs of the track. They perfect this dual vocal approach on “Home Is Run No More.” Opener “Irish Name” is a lament to a broken relationship one built up inside their head and contains one of the album’s most sing-along choruses. “Apologies I Have So Many” wears their Chicago influences on their sleeve with the guitar work coming somewhere between later era Alkaline Trio and Dan Vapid inspired leads.

The focal point on Desire Paths is the album’s midway point “Skin,” which starts off with acoustic picking leading McGhee to document a lifetime of sexual abuses throughout with the full band eventually kicking in. Originally released as a demo to benefit Rape Victim Advocates, it’s a track that informs as much as comforts inspired by the #MeToo movement giving voice and agency to previously untold or unheard stories. The final quarter of the album offers the only stumbling point with a couple mid-tempo numbers that’s more a product of how strong the majority of Desire Paths is. However, it finishes on an upswing with “If It Meant Heaven Was Free” and a chorus wondering “how much whiskey, do ya think / I would have to drink / to drown the darkness in me.” It’s sure to be a hit live.

Desire Paths is an excellent debut from Turnspit that has the potential to be among one of the Chicago scenes best releases in 2018.