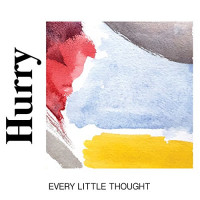 It’s 2018 and we’re all in a hurry. Between the constant and dull scroll of our social media feeds we occupy are minutes with to the instant gratification we demand when pushing a button or clicking a link, it seems like we have no time for the simple and more mundane pleasures in life. With the integration of technology into almost every aspect of our day, it’s hard not to be in hurry. That’s why when we have a few minutes to slow down and take it all in, it’s worth taking advantage of. With Hurry’s latest Every Little Thought, they do just that.

Hurry can be described as an indie or noise pop band, but at the core of Every Little Thought they are their most straightforward yet. The three-piece hailing from Philadelphia have a handful of releases in their canon, originally starting as an outlet for Matt Scottoline to play guitar away from his main emo band, Hurry has evolved into a full-time project. Every Little Thought is a consistent release from top to bottom. This is a pop-rock record in sound, scope, and appeal.

There are still elements of past Hurry releases, the wall of sound appeal of the instrumentation, slightly distorted guitars, and reverb effects coming to mind, but the production value is stepped up here. The shimmery guitars come with a cleaner and crisper tone, working in conjunction with the hazy underpinnings of the songs. The vocals are more straightforward standing out in the mix and not filtered through distortion effects. It has Scottoline’s voice falling somewhere between Surfer Blood and early Drive-Thru Records power-pop band the Benjamins. Complementing the songs throughout are key flourishes, earworm melodies, and catchy guitar leads.

Much of the appeal here is the simplicity of Every Little Thought. As the title suggests, Scottoline finds himself exploring many of the thoughts felt when falling in and out of love. Album highlights include “Read Between The Lines,” “Jamie,” and “The One I Want.” The topics covered are sure to be relatable as these are not deep explorations of connection, but the fleeting feelings when we can take the time to reflect on a day with a lover. Because of the compact nature of the release, the two 5-minute plus songs tend to drag a little, especially the awkward track placement of the eponymous opener.

Overall, Every Little Thought is an enjoyable pop record. It makes no grand pronouncements of pretending to be something it’s not and is sure to be best listened to when taking the time to enjoy your day.

Screaming Females: All at Once