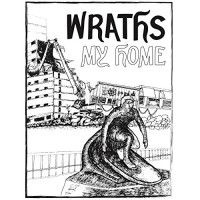 Wraths new EP is exactly what we needed from Pennywise. Considering Pennywise haven’t released any original material with Jim Lindberg on vocals in 10 years, this will do just fine.

Sonically speaking Wraths give us the rhythm section from The Darlings/1208 laying down a solid foundation for guitarist Steve McCall (1208) and Lindberg to play with here. The entire EP reeks of a throwback to 80’s west coast hardcore that these guys cut their teeth on. Citing T.S.O.L., Circle Jerks and Dag Nasty as influences among other California notables, it’s no wonder this record sounds like it came from another era. The production on this EP has been stepped up from last year’s self-titled full length which helps push those bombastic bass lines and busy drums to the forefront where they can shine. McCall comes up with some dynamic guitar tones that conjure up early T.S.O.L, especially on the intro to This Is My Farewell. Vocally, Jim doesn’t deviate from his signature shout-sing that we’ve surely all become familiar with from his many years fronting Pennywise, though the back up and gang vocals elevate the vocals here helping to give Wraths it’s own unique identity.

It’s no surprise that this record, lyrically speaking, touches on some serious issues thematically, ranging from bullying on the almost Nirvana-esque “The Beat Goes On” to the corporate gentrification of cities in the furious opener “My Home”. The themes on this record speak to each and every one of us in some capacity and come off genuine, sincere and candid in doing so.

While the first release by Jim and co. saw them trying to find their footing as a band. This EP sees the band really show off what they have as a singular, cohesive unit both tonally and lyrically speaking. I’m sure many Pennywise fans are chomping at the bit for something fresh from the band but this will more than suffice.