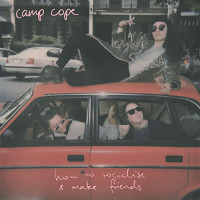 The Australian trio Camp Cope’s new album How to Socialise & Make Friends is a direct challenge to the current status of women in the music scene, gender and relationships, and the role of religion, creating an album of towering, ingenuous songs that don’t so much as cut like a knife as impale like a spear. As the music and vocals commence, Liz Phair’s Exile in Guyville is the most obvious sonic and spiritual forebear to the album’s jangling guitars and mid-tempo, trotting rhythms. The music is sturdy indie rock, but the true revelation is Georgia McDonald and crew’s piercing songwriting, turning confessional songs into manifestos for how to address disappointments in life and love. For the most part, the band avoids the controversial lyrical baiting of Phair (“Fuck and run / even when I was 12”) for songs that take brutally honest stock of modern relationships as we enter an era where women are continuing to exert themselves as deserving equals.

One of the most prescient issues addressed is gender relations in the music scene, as the band offer direct challenges to a genre that has too long been dominated by male self-pity which seeks to shame and degrade the very women it inherently pursues. On “The Opener,” McDonald rolls her eyes at the histrionics of her male foils, noting that “if I was hungry / then you were starving / Now tell the dead man / You’re the one dying.” As the song progresses, the repeated mantra “it’s another man” becomes a defiant kiss-off as McDonald recounts the ways men have brought condescension and backhanded compliments to degrade the band. The true strength of these lyrics is the avoidance of woe-is-me laments in favor of penetrating observation for the stark reality of what the band has encountered.

“The Face of God” is the song that strikes hardest against the culture of male victimhood and female demonization rampant throughout the history of indie rock. After a murky sexual encounter where regret has surfaced, McDonald intones, “And I saw it / The face of God / And he turned himself away from me / and said I did something wrong / that somehow what happened to me was my fault / you can see it in the apologists / and hear it in their songs.” Not to dogpile, but I was struck at how poignantly McDonald’s lines coincidentally addressed the controversy surrounding Brand New last year after they released what arguably might have been their best album but forever may be shadowed by the transgressions of Jesse Lacey (which are also eerily reflected in his tormented lyrics). McDonald questions, “Could it be true? / You couldn’t do that to someone / Not you / nah, your music is too good.” Often, in rock and roll and popular music, despicable behavior is often excused on the basis of the strength of the art (Michael Jackson, Axl Rose, Phil Spector, etc.). Camp Cope aren’t going to let the perpetrators slide without proper consideration and reckoning.

McDonald takes stock of her own careless behavior in late album highlight “The Omen,” realizing “we’ve all made our mother cry / It’s a habit that I’ve finally broken / at this point in my life.” As the song explores an unrequited love and her own attempts at reconciliation and connection, McDonald muses on the role of religion with a particularly revelatory stretch of lyrics. She acknowledges, “And I never needed God / I think I kind of knew that all along / To need a promise of heaven to do good deeds / Seemed inherently wrong.” Camp Cope don’t use their music as a sledgehammer to pound monotonous mantras into the listener, but instead let the songs glide and allow the clearly delivered verses to speak volumes on their own. It is easy to disagree as McDonald smirks that she “wrote you this song / it probably isn’t as good as all the other sad ones.”

The only drawback to Socialise’s music is a repetitive instrumental motif without much auditory diversity, especially along the album’s middle half. However, this mild complaint is countered by McDonald’s incisive songwriting with incendiary couplets tossed out like unexpected cherry bombs. You could literally write essays regarding nearly every song on this album to explore the band’s frank dissection of gender politics in our current cultural climate. Socialise furthers the conversation and is a dynamite introduction to the sharply perceptive music of Kelly-Dawn Hellmrich, Georgia McDonald, and Sarah Thompson.