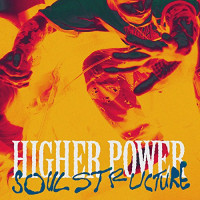 Balancing a sound that clearly pays homage to a bygone era while also carving out one’s own sonic niche isn’t easy. In fact, it’s can often be a recipe for disaster. It’s a hard path to cut. Yet on their debut LP, U.K.’s Higher Power strikes just that balance. Soul Structure, the band’s first full-length, rocks with all the groove of early nineties post-hardcore while also showcasing a musical style that is innovative in the often-derivative hardcore underground.

The music on the record is heavy and melodic, grooving and dissonant. At first listen, the recording almost tricks you into thinking Higher Power keep it simple. Lots of three or four chord grooving metallic hardcore riffs ala Biohazard or Crown of Thornz come to mind. There’s a clear melodic sensibility in the music, and that’s felt immediately on the record’s first song “Can’t Relate.” The choral riffs are played heavily but with head-bopping melody. The song’s breakdown chops the guitars up into what feels like a similarly typical mid-nineties mosh part, only to head right back into the aforementioned chorus.

But as the record pushes forward, a few things begin to pop out. The layering of guitar tracks is one that really gives Soul Structure great dimension. And this isn’t just a few well-placed solos or harmonics. Guitarists Lou Hardy and Max Harper do well in filling out the basic heavy grooving riffs with some great leads, rhythm tracks, and… “Between Concrete Sky” brings this dynamicism to life on the record. Swirling just behind the verses are guitar tracks that span from dissonant ring-outs to clever harmonics. The choppy heavy metal closure to the song shows that the band draws a wide range of influences too. And none of the guitar work feels overblown either. In fact, it makes the record feel more polished and thoughtful.

The LP’s seventh track, “Burning,” is a real standout. It embodies everything that Higher Power has to offer. The  guitar depth is all over this song, as it rocks along with a grooving but heavy vibe that feels somewhere between Leeway and Life of Agony. Homage to a bygone era indeed. And yet, this song also shows that power of vocalist Jimmy Wizard. He is the glue that binds the band’s sound together. And on “Burning,” his singing style simply shines. Don’t expect any sort of disgruntled growl or scream or any other typically indecipherable vocal style here. Wizard sings. And he does it masterfully over a song that chugs along with dark and precise melodies. The ending riff is slow and ominous but also makes for a great transition in the next song.

Wizard’s vocals are the most ingenuitive aspect of the record. He can wail and that makes this record even more distinct in the hardcore world. His cadence over verses and choruses is apt for the music. He knows exactly where the double-vocal recording works for him. And he doesn’t try to push his vocals anywhere beyond where they should be. The record’s final track, “You Ain’t Much,” reflects his abilities and closes out the record really well. It has a ballad-esque opening only to drive right into a super aggressive verse where Wizard shines, mixing up short bursting lines and more drawn out singing. The end of the song is built largely on Wizard’s vocals and ends a great listening experience.

Soul Structure is a great full-length. There is nothing boring or repetitive about it. It has great production. And it offers an utterly hardcore sound that also draws wonderfully on the more melodic sensibilities of metal and rock. Flatspot Records hit a home run with this release. Higher Power offers much to a listener interested in heavy music of nearly any era.