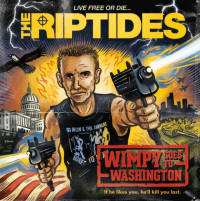 I’ve already spent a fair amount of time singing the praises of The Riptides’ latest album, Canadian Graffiti (2017). Now you get to hear about my love for their newest seven inch, Wimpy Goes to Washington. (The band also has their own beer. Maybe someday I’ll review that too. I do it all for you, the loyal reader.) The A-side, “Wimpy Goes to Washington”, originally appeared on Canadian Graffiti. It’s a one minute and seventeen second blast of hostile pop punk. The narrative revolves around original Queers singer Jack “Wimpy Rutherford” Hayes. Needless to say, it involves drinking, guns and ammo, and a trip to our nation’s capital to save America from itself.

The B-side is an exclusive to this release, and is not available digitally. It is the wonderfully raunchy, politically incorrect and so very Canadian “I Fucked Her at Tim Hortons”. (For those of you who don’t know, Tim Hortons is basically the Canadian McDonalds.) If The Dwarves were from north of the border, they would probably have a song like this. Coincidentally, “Tims” also clocks in at 1:17. Both songs are on the heavier side for The Riptides and feature 88 Finger Louie’s Mr.Precision on lead guitar.

Wimpy is what you hope for in a single. It’s got two great songs including an exclusive B-side. Both songs are catchy and aggressive, and were recorded at the same time as Canadian Graffiti at Sonic Iguana by Mass Giorgini. It also has wonderful movie poster artwork by Jake Saver. It is limited to 300 copies in red, white and clear, so don’t sleep on it. I know I plan to snag one. Buy it now or pay big money later. Wimpy Goes to Washington will appeal to casual fans, hardcore fans and even collector nerds. It should also let The Riptides keep their positive momentum going well into 2018.