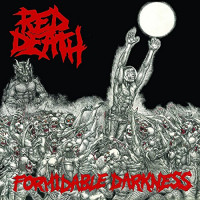 Washington, D.C.’s Red Death released their second LP late last year on Triple B Records. Formidable Darkness was, by all accounts, a huge step up for Red Death. The production, song-writing, and overall expectations were amplified on Formidable Darkness. And the LP did not let anyone down.

Staying true to their thrashy crossover metal-hardcore sound, Red Death did not reinvent themselves on this record so much as they brought their collective sound to new heights. What seemed to be bubbling up on their debut, Permanent Exile, found its breakthrough here on Formidable Darkness. The band chugs with intense thrash metal foundations that are also influenced by the hardcore stylings that have always been powerful in the D.C. underground.

“Iron Willed,” the third song on the record, is a strong exemplar of the Red Death sound. The verses are steadied by horse-hopping riffs that are as apt for a hardcore band as they are for a metal one. And the breakdown similarly straddles this line. What gives the song the most dynamics are the vocals and guitar tracks though. DHD’s guttural vocal style is aggressive yet clear. He doesn’t hide behind an all-out scream, nor does he go to a cheesy metal yell. He draws his vocals from the gut, literally. That his lyrics can be understood over the course of listening, and without necessarily the help of the LP booklet, really affirms the professional production and writing wherewithal. The song ends with an ambient sample before heading into what is one of the LP’s strongest tracks.

The fourth track, “Archangel Void,” is one of Formidable Darkness’s best offerings. The songwriting on this one is stellar, particularly in the drumming. The drum beats not only pace the song nicely, but they also punch in some great quick fills throughout. The break into the song’s second half also shows Red Death’s sense of grooving metal riffs, chugging through a breakdown that will get heads banging as much as it will get kids moshing. The song closes with a melodic but blistering guitar solo that is reminiscent of Leeway or even Megadeth.

The other best song on the record though is “Parasite’s Paradise.” It rocks with an odd sense of melody that draws the listener in, mostly by way of DHD’s cadence in the opening verses. The guitars also pound with the weighty chugging that is a staple across the heavier end of the hardcore or metal spectrum. As the song moves towards closure, DHD harmonizes with the guitars while also offering some clear sing-along fodder.

The final two songs on the record definitely delve more willfully into the heavy metal possibilities in Red Death's sound. And this exploration is done really well. The guitar leads on both "Vagabond" and "Restless Acts of Madness" are full and powerfully delivered.


The record is eight songs that blur the distinction between hardcore and metal much like some of the greats of yesteryear. The aforementioned Leeway comes to mind, especially in the guitars and drums. And there’s a definite Corrosion of Conformity vibe to the record too. For the modern listener, the obvious comparison is Power Trip. And yet, Red Death clearly have a music identity all their own. Formidable Darkness is a record that offers something to nearly any listener of heavy music.

Noi!se: The Scars We Hide