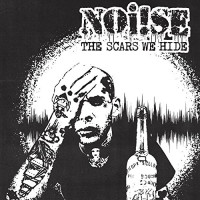 I must admit to having nearly missing out on Noi!se. (I have a irrational bias against bands that use punctuation in their name.) Until The Real Enemy started popping up on last year’s best of lists, I never got around to checking them out. That was a big mistake. Now, thanks to the good folks at Pirate’s Press, I can start over at the beginning. The label has reissued the band’s debut full length, The Scars We Hide (2014), originally on GMM Records.

The first thing that drew me to Noi!se was the vocals. A couple of different guys sing, but the main vocalist reminds me a ton of Leatherface frontman Frankie Stubbs. Stubbs in turn always reminds me a little bit of Lemmy from Motörhead. This definitely has the same raspy appeal. Musically, the Seattle quartet has much more in common with Cock Sparrer, Street Dogs, Cockney Rejects, The Business etc... The lyrics confirm that this is working class street punk and Oi!.

There are songs about drinking and despair, blue collar struggles, lost friendships and some are inspired by active duty military service. The thing that sets Noi!se apart from other bands doing this style is their sincerity and the quality of the songs. Noi!se manages to write catchy, memorable hooks without sacrificing any intensity. The Scars We Hide is full of rapid fire drums, earworm lead guitar licks and sing along choruses.

There’s not a dud on the album, but I do have a few favorites. Opener “Rank and File” has a cadence in the chorus that will stick in your brain. “So I Drift Away” packs a powerful emotional punch. “Statistic” might borrow a bit from the Oi! classic “Runnin’ Riot”. “Pawn in the Game” has a real sense of desperation. The title of the album comes from the relatively uplifting “How We Made It Through”. Closer “The Future is Waiting” might be the best overall song on the record.

If you’re a fan of street punk and Oi!, Noi!se is going to be mandatory listing. If you like your punk to actually sound like punk, then The Scars We Hide is for you. It’s got a sense of urgency that makes it undeniably compelling. I really like this record, and I’m pretty confident that you will too. Now onto The Real Enemy and beyond. Definitely recommended.

NOFX: The Hepatitis Bathtub and Other Stories [book]