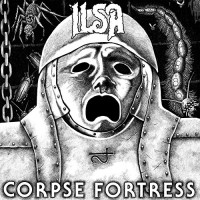 The aptly named Corpse Fortress marks ILSA's fifth full-length studio effort and proves that the band still has a knack for plumbing the darkest depths of musical horror.

ILSA's brand of doom is tempered with a healthy dose of death metal and punk so crusty it's almost unrecognizable as such. Yes, this thing is replete with droning, bone-dissolving riffs that should appeal to fans of everything sluggish - from Eyehategod to Sleep. But the band never seems content to destroy the listener in this fashion only, often accelerating into near-Motorhead territory. The leads are a welcome addition too, displaying an unexpected melodic ability (though they are used sparingly). Vocally, ILSA falls somewhere in the neighborhood of a finely-tuned, mid-range shriek, which - by design it seems - struggles to be heard over the monolithic destruction of their music. An appropriate sentiment given the band's grim and disturbing lyrical content.

Corpse Fortress is undoubtedly a well-executed piece of crusty death doom, but what makes the record so special is its palpable sense of evil. The experience of listening to ILSA's latest seems designed to terrify, drain, crush, and then terrify the listener yet again. Metal records often have an "evil" vibe, but Corpse Fortress invites the listener to enter into a darkened place that they've never been before.

NOFX: The Hepatitis Bathtub and Other Stories [book]