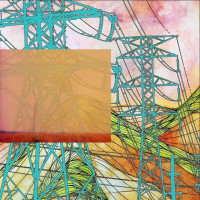 thisishowitendedintokyo is one the best-kept secrets of the Chicago DIY scene. Since their inception, just over a year ago, they’ve procured a modest cult following for their fiery live presence, extraordinary musicianship, and unquestionable passion for their craft. The band clearly has a deep respect for the tradition of 90s screamo and emotional hardcore, and certainly incorporate these influences into their music, but aren’t afraid to scribble indiscriminately over the blueprint laid out for them. This competent creative mindset makes for seven, familiar, yet boundary-pushing skramz songs, that play out in under 20 minutes.

april(s)in, starts off with the deceptively serene “3”. I had heard this song live prior to official release, but the production takes the composition to new heights. The reverb encircling its delicate central lead (which was already quite mesmerizing in its untouched form) creates an ethereal soundscape, entrancing listeners into a false sense of tranquility. Suddenly, four abrupt stick clicks disrupt this intricate tapestry of sound, and the band breaks into utter chaos. Lead vocalist, Marty Pavlik’s, vocals are animalistic in the most literal sense, as his inflections more closely resemble some sort of bird call than any human verbalization I’ve ever borne witness to. After ten seconds of pure sonic annihilation, “3” breaks into half time where lead guitarist, John Sickel, contributes a stanza of backing vocals even more savage than Pavlik’s, before “3” dissipates into the gentle lull from which it was birthed. “3” is a perfect demonstration of the creativity, finesse, and fury that thisishowitendedintokyo is capable of.

“november snow” showcases the band’s command of songwriting with its noodly lead guitar lick and indie rock flair. While I love “november snow”’s jam esthetic, the harsh vocals do feel a bit awkward against the fluidity of the instrumental. Still, this dissonance reinforces the larger motif of expectational subversion, consistent throughout the release. The band plays with this unorthodox sonic blend just long enough to grip and disorient the listener, but not long enough to get stale. Right as they hit this sweet spot, the drums pick up and the instrumental adjusts to more appropriately accompany the intensity of the vocals.

The transition from “november snow” into “math song” is another moment where Nick Feltes’ production work really shines. Though “math song”’s first act resembles “november snow” in tonality, this cut does a better job of adapting once the vocals kick in. “math song” also shows more versatility for Pavlik, as he breaks into some cleanly spoken passages. This uncharacteristic departure from blistering screeching makes for an interesting change of pace, and, in turn, one of the most dynamic cuts on april(s)in,.

The front half of april(s)in, concludes with the rousing “theoneishowedjeffreyatwillsuncleshouseonmapleinbrookfield”. The final mix makes prominent use of group vocals, hand claps, and tambourine. These elements are combined with a sloppily sporadic structure to form a more intimate and untouched aesthetic.

“i may be a scumbag, but im not a fucking loser” was the only single to see official release prior to april(s)in, on the band’s September, 2017 demo. The final album version definitely improved upon some of the presentational shortcomings of that demo, but the most compelling foundational elements are still present. The captivating central riffs, passionate performances, and bopping funk inspired detour are all still here, but the snare, in particular, packs more of a punch, and the subtle touches of reverb give the mix a bit more presence.

“boys life” (a tribute to its namesake) brings back the sparkling sythscape intermission of “math song,” but is much more immediate, in terms of intensity, than any other cut here. “boys life” is the most straightforward of the lot, which works to its detriment, at times, as it does tend to be a tad forgettable. However, I actually found it to be a pleasant surprise on multiple listens through the album because of the conviction of the performances. As far as april(s)in, goes, it’s a bit cut and dry, but extremely potent in any other context.

thisishowitendedintokyo truly goes out with a bang on “chanting song” (named thusly for its lack of any actual lyrics in favor of exclusive chanting). This chaotic anthem has long been the staple closer of the band’s live sets (which almost always end with musicians and spectators alike sprawled out in one giant heap on the ground). Obviously, the song holds quite a bit of experiential significance to me, which carries an implicit bias, but the band really pulled out every stop on the studio version to make “chanting song” feel just as life-affirming on record as it does in person. The track’s build-up consists of cleanly strummed guitar and a subdued marching snare line, which ultimately give way to an electronic lead-in to the triumphant meat of the song. This version of “chanting song” features a massive chorus of diverse vocal stylings, with the final shrill shrieks of Pavlik and Sickel oscillating in and out of a massive wall of sound. This was a song that was going to have to sound massive, and the band certainly delivers on that front.

In an ideal world, thisishowitendedintokyo would be the talk of the skramz community right now. Even so, this style of music has always been somewhat niche, apart from a small handful of major players. However, april(s)in, incorporates appeals to all sorts of music lovers. The album is such a mismatch of compelling ideas all splattered atop of each other to make for a surreal canvas of sound. Whether you value technical skill, raw emotion, or just sheer brutality in your music, april(s)in, covers just about every base.