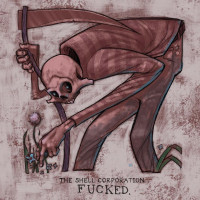 Well the time has finally arrived. The Shell Corporation’s long awaited new album Fucked has finally been released. After the release of their 2014 full-length Mandrake, aside from some touring and a digital single or two that would come out a couple of years later, we haven’t heard too much from the band. But even after  just one listen of Fucked, it is quite clear that they have made their triumphant return.

When it comes to any release in the band’s discography, The Shell Corporation always manages to create a borderline shocking sense of urgency in their songs. In fact, there is so much urgency in this record in particular that you could consider it panic instead, especially when it comes to the first track “Kumbaya.” As soon as the song starts you immediately become aware that you are in for one hell of ride. The use of sarcastically spoken political quotes in between the choruses really extenuate the aforementioned sense of panic. These spoken parts lead into vocalist Jan Drees’s massive screams, which in turn transition into the whole band’s signature three-part anthemic vocals.

“Kumbaya” is not the only track on this record that is a step in a different direction for The Shell Corporation though, most notably when it comes to songs such as “Fighting For” and “Von Braun Waltz.” “Fighting For” is bit more of a mellow tune. While the lyrics are anecdotes about different characters in different situations fighting to build better lives for themselves, the heavily palm-muted notes and less intense vocals give this track quite the somber and almost sad, yet hopeful tone — at least until the outro for the big and bright finish.

The Shell Corporation do stick to their general sound in a solid portion of this record, too. Tracks like “Make It Rain” “Not Funny,” “Cold Reason” and “I Came For The Waters” show that. What makes “Make It Rain” not only stand out on Fucked, but in the band’s whole discography is how it begins. Right after the brief audio clip outro of “Kumbaya” finishes, the band immediately jumps into the hard-hitting and repetitive intro riff. When I say “immediately,” I mean it is a lightning-fast transition. “Make It Rain” has exactly what Shell Corporation fans love about them — soaring, three-part vocals, thought-provoking and reflective lyrics and “in-your-face” guitar and drums.

After a long wait, The Shell Corporation has brought us another album that is possibly some of their best work to date. They ventured off a little bit to keep things fresh and they managed to stay true to their original sound, too. You can hear it in the songs that a lot of time and passion went into this record. You can feel the anger, the sorrow and pure aggression in the lyrics and all of that is mirrored in music. Fucked is quite the accomplishment for The Shell Corporation and it is easily one of the best records to come out in the early months of 2018.

The Last Gang: Keep Them Counting