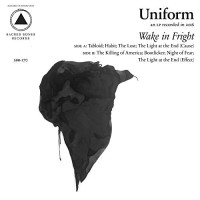 An amalgam of extreme industrial, goth-y thrash, and pounding synchronized beats and shredding, Uniform’s second full-length Wake in Fright is a sonic achievement that would have unfamiliar listeners surprised that the New York City-based act is a duo and not a multitude of bodies responsible for creating so much noise. The album defies simple description with its overwhelming layers of tones and fuzz and sound, and its sheer power and undeniable sinisterness is what separates the record from other current projects in the punk expanse.

Each song on Wake in Fright is a potential backdrop for the feeling of bolting upright in bed late at night, certain that someone else is in your room with you. Ben Greenberg’s driving riff in the opening track “Tabloid” is hauntingly mesmerizing, especially when offset by the aggressive percussion and Michael Berdan’s nearly atonal vocalizations, together conjuring an impending apocalypse. Following the album’s frantic introduction, the lumbering drone of “Habit” builds slowly to an ebb and flow of feedback, pulsating drums, and choral cries that ring out with a sense of urgency and insistence. “The Lost”, Wake in Fright ’s third track, opens with a hypnotic dance beat and post-punk guitar melody, a gothic creation that invokes early-day New Order and power-violence era Ceremony.

Berdan’s groans and maddening ramblings in “The Light at the End (Cause)” paint a less optimistic picture than the song’s title implies. His opening screams, paired with battering drums and ominous tones, devolve into seemingly prophetic expressions made even more chaotic by wiry feedback and a guitar sound as commanding and admonishing as a foghorn. The two tracks that follow are metal masterpieces full of violently charged riffs, yelps, and beats that will leave listeners gasping for fresh air after being played consecutively.

“Night of Fear” and “The Light at the End (Effect)”, two of the longest songs on Wake in Fright, conclude the album with a twinge of resolve supported by deep industrial drones and less energetic percussion; still brutal, but encased in a more subdued container. The latter track incorporates a mix of spoken word, opening with a thunderstorm of background noise and a feminine speaker reflecting on the gloomy truths of mortality and humanness:

“It’s all so horrible, isn’t it? The nightmare of childhood. And it only gets worse. One day you’ll wake up and you’ll be past it. Your beautiful skin will wrinkle and shrivel up, you’ll lose your hair, your sight, your memory. Your blood will thicken, teeth turn yellow and loose, you’ll start to stink and fart and all your friends will be dead.”

The elements of darkness and horror that continuously permeate Uniform’s sophomore record don’t die at its conclusion. If anything, these elements gain sentience, informing the characters and voices that appear throughout Wake in Fright that existential dread is something to work towards resisting; it cannot be destroyed.

Partner: In Search Of Lost Time