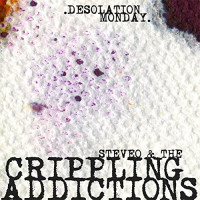 SteveO and The Crippling Addictions

A band with two creative forces can have a tricky time breaking up and moving on to new projects for their fans. It usually gives the listener a clear dividing line about who was bringing what influences to the table. One of the unique features of The Holy Mess was how well co-vocalists SteveO and Jeff Riddle blended together, sometimes making who sang what song indistinguishable. Last we heard from the band, they released the 3-song hesher influenced Thrash Age before their breakup in 2016. With SteveO & The Crippling Addictions, SteveO is the first to return to the fold with Desolation Monday.

Ultimately, if you were a fan of The Holy Mess, you're going to enjoy SteveO & The Crippling Addictions. Desolation Monday kicks off with a very familiar sound in “Good Kids,” albeit a tad slowed down with a lo-fi production style. You’ll immediately notice the familiar chugging power chords and vocal patterns. It’s a strong opener and good indication of what’s to come with SteveO reminiscing about past good times, sneaking in liquor in your girlfriend’s purse, and where life went astray. These are topics revisited throughout Desolation Monday.

The slower pace allows SteveO to more fully explore the songs within. Most recall a classic rock sound filtered through the guitar of a punk rocker. The opening 30-seconds and backing vocals throughout “Girl Two” feels almost like a Go-Go’s song. “Elementary, My Dear Watkins” has the straight forwardness of Tom Petty with a harmonica carrying the melody through the bridge into the final refrain. You’ll be singing along in no time to the endlessly catchy lines “I don’t know / I don’t know / I don’t know which way to go / I got a pocket full of drugs and night to myself / And I feel dirty being home.” “Minoritaville,” a fairly faithful cover of Jimmy Buffet’s “Margaritaville” in minor chords, closes out the album. It’s a pretty hit-or-miss note to finish on.

At times in Desolation Monday, the production can hamper the release. There’s more going on in this album than just three chords with subtle guitar leads and additional instrumentation sometimes getting lost in the mix. The lower end of these songs can come across a bit muddy as well. At other times, the mix can complement the lo-fi nature of it producing a unique guitar tone. A better balance of this would do the album well.

For his first release as SteveO & The Crippling Addictions, there’s a whole lot to like here. It will be interesting to see SteveO more fully explore life outside of the three-chord template and bring his punk rock sensibilities to the classics that influence Desolation Monday.

The Breeders: All Nerve