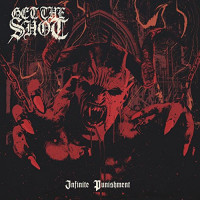 Here’s something for you all. A not-so-widely-known band, on their third album, released in August last year (2017) on New Damage Records – a label that houses Cancer Bats, Comeback Kid, Fu Manchu and Counterparts among others, so that should give you some idea of what we’re dealing with here. But it wouldn’t be fair or reasonable to describe Get the Shot simply by their stablemates – not least because they’ve changed a bit over the last few years.

To be more direct about it – GTS, hailing from Quebec, have been known around the Canadian circuit since even before their 2012 debut Perdition as a hardcore/punk band with no lack of energy or ferocity, but what the band have brought to the table in ‘Infinite Punishment’ is something a bit different to their previous offerings. From the album title, to the artwork, to the guitar tone, there is something altogether more…demonic to them this time around. There are musical cues taken from all over, as well. It stomps like hardcore, has the devastating feel of death metal, the themes and lyrics of thrash (albeit delivered in a more typically hardcore style) and the scatty, fizzing energy of hardcore punk. I’m not going to suggest anything as trite as ‘they take all the best bits of all of them’, but it wouldn’t be far from the truth…

From pretty much the get-go, GTS set out their stall and you’re left in very little question as to what you’re going to get from the record. It opens with “Purgation” – 1:43’s worth of initially swirling background noise (including what sounds like child’s screaming) and then some stomping bass and drums continuing through the length of the track, overladen with a threatening, slashing riff and gang vocals – then you realise that this is basically just a build-up to the opening of the album proper in “Faith Reaper”. The pace picks up immediately and you get a wild, Slash-esque solo and a full-blooded hardcore scream – all within the first 25 secs. This really sets the blueprint for a lot of the rest of the album. By virtue of the delivery, some of the lyrics are borderline ineligible, but somehow it really doesn’t matter. The ends of notable lines are often doubled with backing vocals which makes those particular lyrics altogether clearer and more memorable. In many occasions, the music drops away & they also serve as acapella mosh calls, which it has to be said are in no short supply – but I’ll take that all day over there being too few, when backed by this glorious racket.

Basically, there is no real subtlety to the record; but I don’t mean that as a criticism. This is straight angry, metal-tinged hardcore with occasional identifiable nods to the band’s influences. Vocalist ‘Fruit Punch’ J-P occasionally (briefly) dials back the hardcore delivery to a Liam Cormier sneer/growl that works brilliantly, guitar duties are shared between Tom Gun (Lead) and Samy Hater (Rhythm) and Tom’s work definitely takes inspiration from Slash as mentioned above, while the rhythm section itself (Dany Boozer – Bass, and Temaya Ratkoon – Drums) doubtless have a lot of early Metallica in their record collections, which means the record really benefits from that thrash-style driving force.

The songs on display here have titles ranging from “Waging Death”, “Demon Stomp” “Evil Rites” and “Eternal Decay”, so the lyrical themes on display won’t come as a massive surprise (lots of hell, pain, quasi-occultist references, etc) – but it’s all about the delivery and the overall impact of it throughout the record, which is consistent but never becomes monotonous. When you consider “Purgation” is essentially an intro track and that the final track “Den of Torments” (more on that in a moment) is something of an outlier, then you have a 10-track body of work here, which is perfect for this style of music to my mind. It excites from front to back, at least partially because it doesn’t outstay its welcome, basically.

Final track “Den of Torments” is an interesting one…it brings the pace right down, adds almost doomy rhythm guitar and even more ominous lead guitars to a completely unexpected change in vocal delivery – something close to a croon accompanies the dense, portentous track, although the pitch does shift towards more familiar ground later in the song. Either way, it’s a welcome addition to an already great album. Whether this is GTS experimenting or something that they had in their locker anyway remains to be seen – but it closes the album out nicely.

I’m sure it’s pretty clear how much I like this record. It’s a stunning amalgam of old-skool styles, meshed seamlessly & delivered with absolute, unflinching, confidence that results in 35 minutes or so of white-hot, raging, hardcore with a metal sheen that feels absolutely 100% modern. I suspect Get The Shot might find themselves garnering a lot of new fans on this album cycle – and rightly so.

The Breeders: All Nerve