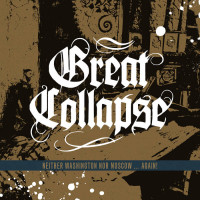 There's no better time for a Strike Anywhere record. And if you can't get that, then Great Collapse will deliver. And rest assured, S.A. Thomas Barnett frontman is in fine form, ripping society and getting neck deep in the web of politics-meets-skate-punk. Now, as a huge S.A. fan, I really wanted Great Collapse to evolve into something of their own, especially after records like Holy War and Elemental (which I did enjoy but which to me lacked their own identity away from S.A.). That hasn't been done here yet again, but whatever, because Neither Washington... as flawed as it is, is a solid record and one that feels safe yet very profound for the world we live in.

The thing is, everything's what you'd come to expect. There aren't pleasant surprises or curveballs that leave your jaw-dropped. It's the S.A. formula with speedy riffs, fast-drumming and melodic hooks -- but all overdone. Anyway, don't think I'm hating because I love the way G.C. rally around songs like "Who Makes" -- addressing Nazis and terrorists like Trump today. And shoutalongs for the pit? Mid-tempo punk anthems? Look no further than "Atomic Calendar" and "Meltdown", which is a catchy banger and an overall call-to-arms a la "Infrared".

You can just sense though that a harder edge would have worked so well. "An Injury To One" starts off a la A Wilhelm Scream... then goes back into the typical style of S.A. and G.C.; the same effect that happens to "Southern Exorcism" which has an At The Drive In eclectic guitar vibe to it before it's all killed off to sound like almost every other track on tap. And therein lies the rub. Too many songs are similar. "Patient Zero Comes Home" tries to flip this but it's too little, too late as it struggles to kill off the middling tracks that blend together too much.

All in all, I adore the messages here about us all being shadows surviving in the ghost machine, in a world where global superpowers are still at war, especially on a mental and media level. No one's blushes are spared by Great Collapse but I must say, they're mining a lot of what's been done before, and not just by them and S.A. At day's end, Neither Washington... is lyrically awakening but musically, it's not too inventive. That said, it's still a must-listen and a sobering record for what's happening and what's to come.

Get The Shot: Infinite Punishment