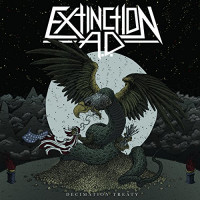 For some, thrash is having a revival. For Extinction A.D., it never went away. Over the last 5 years, Extinction A.D. has been churning out a potent mix of metal, hardcore, and crossover in every VFW hall, basement, and dive club across America and beyond. The relentless and repentless road dogs come from the somewhat still simmering ashes of the immensely underappreciated This Is Hell and Soldiers, but with the release of Decimation Treaty and a tour schedule that never ends, they have forged a path and identity of their own.

Decimation Treaty takes the framework Extinction A.D. built on debut LP Faithkiller and adds a healthy dose melodic death metal to their New York influenced thrash. “Legions of the Grave” opens up the album capturing all the enjoyable aspects you’ll find on this release; fret shredding solos, pulsating drums, and breakdowns that are as technical as heavy. Throughout the album, you’ll hear guitar leads that wouldn’t sound off base on an At The Gates record connecting the disparate parts of their Slayer driven thrash. Tracks like “Second Worlds,” “Pray to Die,” and the instrumental closer “Decimation Treaty” are good examples of this. While there have been hints of this in the past, they are definitely more pronounced on Decimation Treaty.

With his first official appearance on an Extinction A.D. release, guitarist Ian Cimaglia makes his presence known. There is a reckless abandonment to his guitar solos as if he could go off the rails at any minute. They are propelled by the production allowing them to pop out in the mix giving them a throwback feel to the '80s. The Big 4 are well represented as influences here. In addition, the punchiness to Peter van den Berg’s bass playing allows the mid tones of the instrument to shine through the onslaught of riffage when necessary. One notices this in “Burnt Indifference,” with the bass giving the final breakdown a bounciness to it.

Extinction A.D. also incorporate some of the groove-influenced metal that is driving a lot of the bands receiving mainstream recognition. While these parts never stick around for long, the aforementioned “Burnt Indifference” and “In the Wake of Uprising” show the band incorporating these influences, even if still filtered through the prism of classic thrash.

Decimation Treaty is an ass-kicking from front to back. Rick Jimenez's last vocal on the album has him screaming “I won’t compromise,” during “Rats In The Wall.” This is as much an ethos for Extinction A.D. as it is a call to action during the song. Nothing is compromised in this onslaught, even if it goes underappreciated by the masses. That seems to sit just fine with the band.

A Vulture Wake: The Appropriate Level of Outrage