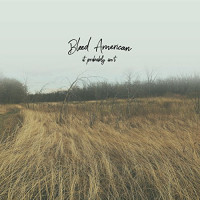 Canadian band Bleed American has had a bit of a patchy history. The band was originally active between 2013 and 2015 and released an EP and their debut LP in that period of time before quickly calling it a day. The summer of 2017 rolled around and the band decided to get back together for a reunion, which eventually led to the 2018 release of It Probably Isn’t.

Bleed American’s sound has always been pop punk, with an emphasis on the pop aspect. The band is vocally driven with a heavy focus on the catchy melodies cultivated by the dual vocal attack of the Voth brothers. It Probably Isn’t is a progression from past releases in both the catchy chorus and lyrical content departments. The record and lyrical content focus largely on retrospection and grief and the music suits this theme well. The record has a much more melancholic feel to it than past brighter releases.

It Probably Isn’t starts out strong with a short and sweet d-beat driven intro “Linger” that quickly segways in to what is one of the strongest offerings on the LP “Smile Lines”. “Smile Lines” is a very catchy song that features an infectious and driving guitar lead that contrasts nicely with the vocal melody. The other stand out song in a similar vein is “Comic Sans”.

My single complaint regarding this solid pop-punk offering is the overly clean guitar tone. While the lack of tone helps to emphasize the impressive vocals of both vocalists, some punch and attack was undeniably lost. That being said, that is only really applicable to the faster songs on the record, with songs such as “Worth” and “No Rush” the clean guitar tone feels more appropriate.

Bleed American have done a very good job of writing and producing an engaging and solid pop-punk record. It is also impressive to note that singer and guitarist Jordan Voth also engineered the record – that is no easy feat. I recommend It Probably Isn’t to anyone with a soft spot for pop punk with a nod to emo of the past. Bleed American definitely shows a promising future with this release if they decide to continue moving forward. FFO: Motion City Soundtrack, Finch, and Saves The Day.

A Vulture Wake: The Appropriate Level of Outrage