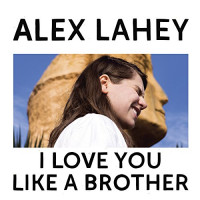 There’s something in the water in Australia and it isn’t sharks. Obviously there are also sharks but there must be something else because the last few years have seen a huge influx of bands from down under. Bands like Camp Cope and Smith Street Band along with singers like Courtney Barnett have been winning over audiences worldwide with their parse-able accents and an antipodean earnestness. Alex Lahey is the next one up with her rocking debut full-length, I Love You Like A Brother.

Lahey’s follow up to her 2016 EP B-Grade University, walks a perfect line between up-tempo pop and punk rock-inflected driving guitar rock; armed with hand-claps, “whoas” and just enough production touches to pull in listeners and keep their toes tapping. The album opens fast with the more rocking songs like the single “I Love You Like a Brother” which leans heavily on Lahey’s accent to make the line ‘I love you like a brother, just like I oughta’ rhyme, between staccato synths, distorted guitar and shout-talked verses. The first cut “Every Day’s the Weekend” is another shouter with Lahey spitting lyrics as fast as she can over slamming guitars.

A major theme of I Love You Like A Brother is the challenges of being in relationships with flawed people and as a flawed person. Love that isn’t quite right, whether the timing is off or the other person brings out the worst in you. The highlight of the album, “I Haven’t Been Taking Care of Myself,” epitomizes this idea with an epic chorus of ‘I haven’t been taking care of myself/I’ve forgotten what it’s like to be in good health/ I’ve gained weight and I drink too much/Maybe that’s why you don’t love me as much’ before a bridge where she promises to ‘make any compromise if it keeps you by [her] side’. “Backpack” is another song about loving someone who’s always on their way to somewhere else while the Doo-Wop inflected “Let’s Call It A Day” tells the tale of not feeling it in the face of drunken advances.

The second half of the album gives the pop-sheen production more room to work with swirling synth bases and slower jams that still maintain the catchiness of the earlier songs. Fans of Tegan and Sara’s later work will enjoy these, especially “Awkward Exchange”, which echoes “Stop Desire” and the best parts of their album Love You To Death. No surprise that Lahey was tapped to open for the Canadian twins on a tour.

Australia rears its head here and there on the album as well, whether it’s an entire song or a reference here or there. In a backhanded ode to the town, Lahey sings “Perth is lucky that she’s pretty/Otherwise I’d hate this city” about a place otherwise poisoned by the presence of an ex in a dreamy, surf rock murmur.

Great pop music (or pop rock or pop punk) gifts us heartache in a bouncing package that keeps us smiling through our tears. Alex Lahey is here delivering the heavy themes: loving the wrong person, at the wrong time, not being able to afford it, not being able to marry who you want, but she has bundled it all up with a blast of sunshine from down under to keep us warm and tapping our toes the whole time.