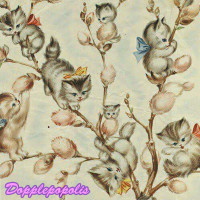 You know how Hüsker Dü had that Everything Falls Apart phase where they were all punk rock and shouty before they shifted into their more melodic power pop Candy Apple Grey / New Day Rising period? Indiana trio Dopplepopolis seems to be working on a slightly more constricted timeline on their self-titled debut EP. This is to say that the six songs contained within, in addition to giving me an excuse to get my Grant Hart on, vary wildly in terms of sound.

That follows because the singing and songwriting duties in Dopplepopolis are shared equally between Simpson (who recorded the record at his Velour Underground studio), bassist Tim Springfield, and Jonny Sommer, who swaps drumming and guitar duties with Simpson. Each songwriter seems to have brought his own idea of what the band should sound like to the table and the effect can be a particular form of musical whiplash.

The record opens with “Bloodbath Salts”, a driving little number that mixes beer-slamming bar punk with a guitar riff and tone that sound like late-stage Bad Religion. Throw in some Bottlerocket goofy body-horror lyrics and it’s good to go. The second track “Little Green Ghouls” is a powerhouse stand out song. It segues cleanly from the first track with a powerful opening riff before suddenly downshifting into a wave of fuzzy, blissed-out indie pop. Despite having the most overtly political lyrics on the record (the ghouls in question are Trump and friends) the band keeps them from landing too on the nose by enveloping the words in a lush wall of 90’s alt-rock noise with twinges of early-aughts emo melancholy. Alternating between toe-tapping cowbell-punctuated verses and a sing-along half-time chorus, this is the song that will get listeners hooked in if they aren’t already.

With the sonic continuum of the album established two songs in, the rest ping-pong back and forth. She’s a little bit country (not really), he’s a little bit rock-n-roll. He’s a little bit Guided By Voices, she’s a little bit Mr. T Experience if Dr. Frank was really into malt liquor. The street punk energy of songs like “Always on Empty” keep pushing the album forward while the aforementioned “Ghouls” and its partner “Hanging On” create space for the instruments, especially the drums, to flex their muscles and show what they can do with tasteful flourishes. They rarely dwell on anything overly long; the only song over 3:15 is the meditative closer “Zapp’s Song Pt II”.

The songs on Dopplepopolis by Dopplepopolis feel familiar, in a good way. They seem to be wearing their influences on their sleeves, disparate as those influences are. What will be interesting to see is if future releases continue to run those influences and genres side by side, or if the band decides to coalesce them into a single, cohesive sound. The talent and songwriting are evident on this album; these are catchy, enjoyable songs, but you could be forgiven for thinking they came from a two band split with the second band uncredited.

DISCLAIMER: Greg Simpson writes for this site in addition to singing, drumming, and playing guitar/glockenspiel/piano/synth on this album. Who knows what else the man does? Greg and I aren’t friends. He kicked me in a Tim Horton’s parking lot once but it turned out later it wasn’t him. Either way, the man has no sway over my unvarnished opinion of his band and their album