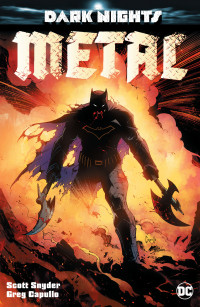 Many months ago, I volunteered to review what I understood to be a ‘heavy metal themed’ Batman comic. When it finally arrived in the mail, I dove into it immediately. A couple of pages in, I was wondering where all the Black Sabbath and Iron Maiden references were. I also noticed that Batman was actually only part of a Justice League ensemble cast that also included Wonder Woman, Superman, The Flash, Green Lantern and Cyborg. After a few more pages, I wondered if the heavy metal references were so obscure that they were going right over my head.

After I finished, I realized that I’d made a terrible mistake. A closer look at the cover made it even more obvious. The title was actually Dark Nights Metal, not Dark Knight Metal. Also, the ‘metal’ was, you know, the ore, not the musical style. (I guess the raised diamond plating on the word metal should have been a clue, but that’s pretty heavy metal too.) All of a sudden, I went from being highly qualified to review this to being slightly under qualified. There was a time when I was a regular comic book reader, but these days I’m a casual fan at best. Still, since the good folks at DC went through the trouble to send us this, I thought I’d take a stab at it.

The story opens with our heroes in a heep of trouble. They narrowly escape death, only to return to Gotham to find even bigger problems. I don’t want to give the plot away, but it involves a strange metal that originates in the dark area outside of the known multiverse, and an impending invasion by a previously unknown species. Toward the end of the story, Batman does become the most prominent character. All the action is at the very beginning, and the vast majority Dark Nights Metal is exposition. It’s clearly setting up the story for the future.

I’d almost forgotten how absurd some of the ads in comic books are. Here we have Green Lantern teaming up with Colonel Sanders to sell Kentucky Fried Chicken. Later, Superman, The Flash and Gorilla Grodd are peddling Snickers bars. On the plus side, the full color artwork looks great. The cover is also nice and heavy and glossy. (Still, a Judas Priest reference or two would have helped.) Issue number one probably needs to be judged in its greater context, but I don’t have that luxury. On its own, Dark Nights Metal is just an OK read.