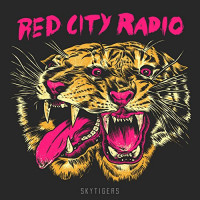 I imagine I’m not the only person who has hugely happy memories about the 2011 release of RCR’s debut full-length The Dangers of Standing Still. Its infectious, high-tempo, urgent punk with as many ‘Woooooaaaaahhhh’ singalongs as you could ever wish for, was the soundtrack to many people’s summer that year, including mine. I felt at the time like I’d found a new band that was so directly in my sweet spot that it felt like they’d been conceived almost exclusively for me.

Fast forward 7 years and RCR are something of a different proposition. Releasing this, their 2nd lot of original material in a post-Paul Pendley world (the erstwhile guitarist and co-vocalist left in 2014, only to be replaced by Nothington guitarist Ryan Donovan) RCR have moved on musically as well. In their self-titled 2015 record (their 1st since the Pendley/Donovan switch), it was quite clear that RCR were making steps down the ‘rock’ path as opposed to sticking to the punkier sounds of the debut - and to a lesser extent, 2013’s Titles. At this point, as the sole vocalist, Garrett Dale (who also released a 2-track solo EP in 2017) is very much front and centre of the band’s sound. This isn’t necessarily a problem as his vocal is as strong as ever - a gravelly, whisky-soaked baritone that has obviously been painstakingly honed from his rasped punk cries of yesteryear.

The flip side to this however, is that this feels less like a group of lifelong friends, desperately wringing punk-rock energy and frustration out of their sweat-soaked flannel shirts, but more like a punk band backing a really good, slightly unorthodox singer, in a way that rarely surprises anymore. When Garrett started experimenting with the full range of his voice on Titles, it was seemingly as a means of bringing some variation to the band’s sound, but the band’s sound has now rather been taken over by it. The perfect example being “Show Me on the Doll Where the Music Touched You” from Titles - in comparison to this record’s “I’ll Still Be Around”. On the former, Garrett croons almost mournfully over the intro to the song, which at the time felt brave and different - after which the song itself shifts and opens up with a change in time signature and an exhilirating solo, before reaching it’s culmination in the last minute of the track. On “I’ll Still Be Around” however, you have an acoustic, country-infused 40-second intro, before the song kicks in proper, but when it does…it doesn’t so much ‘kick in’ as slope into view. Even when the solo arrives at 1:35 (and hangs around until after the 2-minute mark) it doesn’t ever really feel exciting, sadly.

But if we accept that this is just the direction that RCR have decided they want to go and consider the songs for what they are, then there is still a lot to like here. If you’re a fan of the lower-tempo, grizzled troubadour thing that RCR have been moving towards, then this is an EP you’ll absolutely get on with. The lyrical content isn’t going to win any prizes for originality, admittedly – and sometimes feels a little sorry for itself. Lyrics such as “I was hanging out in the shadows…” and “If you wanna see me, I’m easily found, in the darkest bar in the corner of a shit-hole town…” feel a little hackneyed, but do at least fit with the roadworn, dive bar aesthetic of the songs.

Overall, I still enjoy hearing RCR, but even with the final, eponymous track including a lengthy, slightly mawkish sample from a (presumably old) movie, that runs for almost 3 of the track’s 6 minutes – this feels a little bit like RCR treading water. In spite of this attempt at innovation (that doesn’t really work, to my mind), it feels uninspired and dare I say it…a little boring. Not terrible by any means, but not the EP I was hoping for, I’m afraid.

Casey: Where I Go When I Am Sleeping

Moose Blood: I Don't Think I Can Do This Anymore