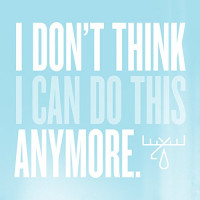 Moose Blood are a band I had high hopes for only to see them regress by the record. In their early days, the Canterbury natives had a special drive to them, an indie-rock flair that I really enjoyed when I first heard them with post-hardcore/screamo Brits, Departures. Since then though, they've nose-dived into a pop-punk band that's as bland and vanilla as you can get, and I Don't Think I Can Do This Anymore ends up reflecting how I feel listening to them nowadays

It's something similar to what Have Mercy did when they left Topshelf, and ironically joined Hopeless Records, which is where Moose Blood is at presently. Can't say I'm surprised at how diluted they've gotten because Blush, their last LP, more or less hinted at this direction. They feel so by-the-numbers now, as evidenced by songs like "Have I Told You Enough" and "Talk In Your Sleep" -- whose lyrics are almost as bad as the song titles. They try to be all vulnerable but come off overly cheesy with no real big hooks. It's kinda creepy as well digging into these lyrics which feel like they're from a teenage stalker, which feels like a correlation of the sexual assault drama associated with past band members. Listening to this reminded me how sick I felt when I re-read Brand New's Science Fiction lyrics or even look back at Kevin Spacey's films. There's some odd foreshadowing there I'd rather not remember.

Back to the disappointing music now -- the same forgettable style follows with songs like "Can We Stay Like This?" which you can tell is an attempt to copy fellow UK band, Neck Deep, who also watered down their sound drastically over the years. You can tell these bands are retrofitting their style for things like Warped Tour and Riot Fest, and while they'll pull numbers now, it doesn't differentiate them at all from the pack.

There's still hope methinks with songs like "You Left In The Worst Way" -- a mid-tempo indie jam that harkens back to the songs of old and which manage to show some sort of musical imagination. If Moose Blood don't inject more of this into their future records, well, expect them to hit rock bottom sooner rather than later because I can't see this drab, run-of-the-mill attempt at pop-punk lasting. Not when you've got bands like The Wonder Years and Joyce Manor doing this shit right. Here's to hoping they rediscover the fire of old circa 2012.