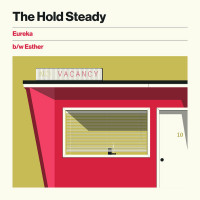 Recorded in the same sessions as “Entitlement Crew / A Snake in the Shower,” “Eureka” is top notch Hold Steady. Craig Finn’s always incredible poetry backed once again by those who compliment him best. Tad Kubler is as impressive as ever and, holy hell, welcome back, Franz Nicolay! Those keyboards, even at their most subtle, add such an important element to the world’s best bar band. A chant of, “No gods, no kings, let freedom ring! He never wants to do anything,” builds to an ending so traditionally Hold Steady.

“Ester” is crafted more like a Finn solo track. However, Kubler, Bobby Drake, Galen Polivka, and Steve Selvidge keep it from ever hitting the despair found on We All Want the Same Things. It tells the story of young love getting older, containing lyrical patterns like, “traded in our tickets for drinks and little trinkets,” and details like, “Of course I call her Esther, I don't know her other name.” Finn decorates a week of romance as if it were years.

Any new Hold Steady music is welcome but these two songs are excellent, the work of a rejuvenated band. Hopefully we get a new full length sooner than later.

Moose Blood: I Don't Think I Can Do This Anymore