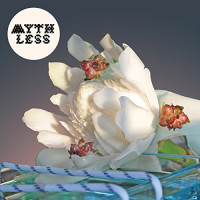 There’s a saying that goes something like DJs are musicians who lack the friends to form a band. There’s probably a little bit of truth in that, but it’s also true that DJs can come up with creative and innovative soundscapes. It’s a fine line between self-indulgent and creativity when your creating on your own. But what happens when you take that mindset to a musical project? With Mythless, we find out.

There is a lot going in Mythless’ debut EP Patience Hell, but also seemingly little. Mythless is the new project from Jason Bartlett, former guitarist and vocalist in indie-noise band Fang Island. Although no official statement was made, it would appear Fang Island has been put to rest with Bartlett pursuing different art projects since their completion. In Mythless, he combines all of this to create soundscapes that are as much about visualization as they are about the aural aspect of the music. Patience Hell is a canvas of electronics, guitars, keyboards, drums, vocals and never-ending layers creating something that is pretty self-indulgent.

Bartlett describes this project as “maximalist” and coming from a former member of Fang Island, a band that didn’t let an inch of space go unfilled, it’s an accurate description. Indeed, Patience Hell contain those same elements of needing to fill every inch of space, but this time it’s only Bartlett creating the sounds. While the layered guitars remain, there’s also a healthy dose of electronics and keyboard mixed in. It seems like there is no end to the layers of noise swirling in and out of vocal patterns and rhythmic drums. These four songs seem best enjoyed laying out in a field with your eyes closed taking in the aural canvas.

However, this makes for a difficult listen in any other setting, especially without coming close to a standout moment on Patience Hell. This is most noticeable on closing track “Copper Mirror” as the drum fills seem to overwhelm everything else. Sometimes giving the space in between all the sounds a chance to breathe wouldn't hurt. There is simply too much going on here and a friend would do well to help pull this project back some.