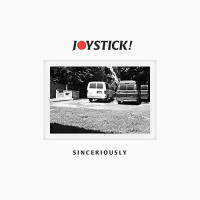 For better or for worse, the first song of an album can tell you a lot about what the band has in store. And that’s no different for Sinceriously by Louisiana's Joystick! In just 43 seconds, you pretty much get the picture about what the band is trying to accomplish. Thirteen seconds of speedy kick drums and octave laden guitars, ten seconds of horns, a few seconds of vocals with not so serious lyrics, repeat. And we’re off to the races.

Sometimes, Ska-punk can be a recipe for disaster, but there is no disaster here. There’s a lot of moving parts, but Joystick! put together a solid 12-song album with equal parts ska, equal parts punk, a hint of hardcore, a dash of dixieland, and a whole lot of catchiness.

At first glance, you can tell the band has a sense of humor with songs like “Alcoholiday” and “Turd in a Punchbowl”, both songs paying tribute to a love of drinking, while making pop culture references to movies like Police Academy in “Jazzland Bandits (Welcome To Your New Life)”. But while the band likes to have a good time, there is also a serious side to this album, with some lyrics referencing classics like Shakespeare’s Hamlet (“Anchors Away” & “Straight and Narrow”) and The Iliad (“Merry Kitchen”).

Overall, the album is a great listen. It shifts gears enough so the songs never get boring, yet it is not erratic. The horns are just enough to drive some of the melodies, but they are not overwhelming. There are obvious sonic similarities to Streetlight Manifesto and Slapstick, even down to the ‘Hey Hey Hey’ in “Turd in a Punchbowl” reminiscent of the latter mentioned band. At times, it actually reminds me of Assorted Jelly Beans (remember that band?), though the NOLA outfit writes tighter songs. Even more importantly, though I’ve never seen the band in person, all of the songs on this album probably translate well to their live set to make for a lively, energetic, alcohol fueled affair.