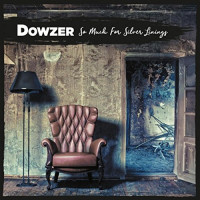 Originality is, to some, a value in itself. I'm not one of them. While it is certainly commendable to try to push the boundaries of specific styles, I think playing it safe can be a good choice too. In fact I prefer, both in music and in literature, a genuine homage to a well-established genre to an annoying hodgepodge.

All this to say that yes, Dowzer sound like countless other pop-punk bands, but, yes, they are also very good at what they do. “So much for silver linings” is a good melodycore album that reminds me of, among others, the softest things No Use For A Name have done (think maybe “Keep them confused”). They don't quite reach the same level of songwriting and punch, but they're not too far either, and the songs flow nicely, never overstaying their welcome. They have three voices, two males and one female, which surely helps make the whole thing more varied, and are pretty good at creating vocal harmonies and at exchanging lead roles.

The songs vary between mid-tempo - “No one knows”, “Making waves” - and faster numbers - like the opening track “Scenes are for sinners”. Among the former shines the very catchy “Hindsight bias blues” (a good title I'd say, just like the album itself), but there really isn't a single stinker.

There isn't either any obvious gem either, which is the album's major shortcoming. A bit more variety and, most of all, a bit more aggression would surely have helped, as after a few listens this does tend to taste a bit too sugary.

The lyrics focus mostly on introspection and, despite being a bit shallow, manage to keep clear of cliches and banalities.

All in all, while it certainly isn't a masterpiece, “So much for silver linings” is a record that deserves the attention of anyone who likes this kind of music. I have listened to it a lot and don't plan on stopping anytime soon.