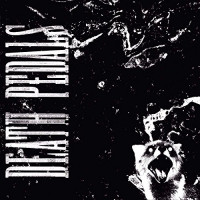 There’s always a bit of sadness when a good band releases their final album. This sadness is increased, when you discover the first time you’ve heard a band is also on their last album. Death Pedals released their final album in February of this year. Mainstays on the London DIY scene, they’d somehow eluded me for their eight year existence. And I have to say, that’s a damn shame. This album reminds me so much of bands from the early 90’s, like Liar and Goat era Jesus Lizard or Cherubs, on their album Heroin Man.

The album opens with “Endless Terrain” and from there; the album tumbles along as a rough and blinding velocity. The distorted guitars and rhythm section are brought to the front, while the screamed vocals get buried in the mix; it rips off Steve Albini’s signature sound. But, I’ll be damned if it doesn’t work perfectly. There are plenty of bands who’ve captured the musical spirit of their predecessor, but it’s rare to capture the production style of someone else this perfectly. Death Pedals were likely able to pull this off because they recorded everything live, and made no attempts to alter whatever was captured.

Elsewhere, on songs like “I Am a Loser,” “Dr. Tom,” and “Shower of Shit” Death Pedals keep their sound loud and aggressive. While I typically prefer bands who offer some variation in tempo and dynamics, this album was the perfect sledge hammer. This is easy enough to pull off, go pick up any album by a band whose name is written in a font you can’t read. But, pulling it off with any amount of honesty is a far more difficult task. That’s accomplished here; this album is a loud, aggressive, primal, and never ceases to sound honest in every way possible. The only downside to this album, is it’s the last one Death Pedals will ever release.

Chastity Belt: I Used to Spend So Much Time Alone