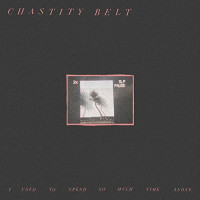 Seattle quartet Chastity Belt know how to have a good time. No strangers to partying, they exude a cool irreverence and they can make noisy art inspired by giant vaginas and cool sluts. The group’s sonic trajectory has shifted slightly with the release of their third LP, I Used to Spend So Much Time Alone, a moodier, more existential post-punk collection that reveals a new level of vulnerability. Chastity Belt continue to exercise their Pacific Northwest chill, but in a way that truly shows off the band’s dynamics, skill, and intimate understanding of each other’s musical wheelhouses.

Especially noteworthy is the chemistry between rhythm guitarist/vocalist Julia Shapiro and lead guitarist Lydia Lund, a marriage of talents that can reliably produce perfect counterpoint and complementary melodies. Both Shapiro and Lund’s guitar parts are intricate and calculated, building on one another’s tonal position in the catchy opening track “Different Now” or mirroring syncopation in the melancholic introspective “Something Else”. The communications between their instruments on every song are detailed and creative; not one riff or chord progression sounds the same.

Though bass and percussion have been significant players throughout Chastity Belt’s discography, Annie Truscott and Gretchen Grimm, respectively, have heftier presences on this record and contribute much more than rhythmic support. Whether it involves a strong, new wave-esque preamble in the record’s roiling denouement “5 am”, or an almost sinister sounding driving force in “This Time of Night”, Truscott and Grimm’s instrumentations sit heavily on the album’s mix in a crucial way. Grimm is known primarily as the band’s percussionist, but she makes her vocal and guitar debut in Chastity Belt on “Don’t Worry”, a sedate, dreamlike tune that also features Shapiro on drums in a surprise role reversal.

I Used to Spend So Much Time Alone takes on a meditative, shoegaze-y character that Chastity Belt has flirted with on past albums, but never dove into headfirst without cutting in bursts of high energy and cheeky lyricism. The majority of the record exhibits a slow and dark dynamic that they have mastered as seamlessly as their previous personality. The shadowy, heart-aching tune “What the Hell” ebbs and flows as Shapiro drones “I had a lot of thoughts today, I felt okay. I can convince myself of anything, so what the hell” with the passivity of a tortured doormat. A few songs later, however, a layer of self-awareness emerges when Shapiro sings “I wanna have some self control, I wanna be sincere. But nothing’s ever really free when you’re living in fear” on the titular track “Used to Spend”, a hazy reflection that fittingly leads into the album’s conclusion.

Chastity Belt have clearly grown as musicians, songwriters, and risk-takers with the release of I Used to Spend So Much Time Alone. Perhaps this deeper venture into the elements of shoegaze and post-punk has sparked an exciting new path for the group.