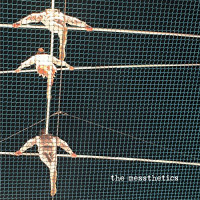 First off, ignore the stars accompanying this review. I don’t know that I’m qualified to review the debut album by The Messthetics, a band comprised of the indomitable rhythm section of Fugazi with the talents of jazz guitar virtuoso Anthony Pirog. Since this is an instrumental release, I don’t think the standard forms of criticism necessarily apply (and I definitely lack the credentials to provide much insight into Pirog’s instrumental techniques). Let’s just say that there’s a perhaps misplaced hope that this rejuvenation of activity will lead to some sort of continued burst of new material from the Fugazi camp. The Evens are great in their own right, but I have sorely missed the drum and bass combo of Brendan Canty and Joe Lally. Hopefully, this new endeavor will spark a renewed sense of creativity between a pair of musicians of whom we are in dire need.

I assume everyone who ventures to this site is more than familiar with Lally and Canty. The mystery man is Anthony Pirog, a free jazz and experimental music aficionado. Pirog grew up in the DC suburb of Vienna, Virginia, played in numerous bands in his adolescent years, and went on to study jazz guitar at Berklee College of Music in Boston and NYU. Pirog has performed with a multitude of jazz and experimental groups, including a trio with Smashing Pumpkins drummer Jimmy Chamberlain. He has garnered numerous accolades within his scene and now has joined up with the beloved Fugazi rhythm section for The Messthetics.

So what are The Messthetics? Consider this an instrumental representation of the spirit of Fugazi with Pirog’s guitar running amok over the foundations supplied by Canty and Lally. The two monster tracks on this collection are “Quantum Path” and “Crowds and Power.” On “Quantum Path,” the trio conjure an escalating finger tapping rumble that merges into an exponentially fleshed out power chord riff before finally taking orbit to sail over the planet in an atmospheric outro. “Crowds and Power” begins as a series of rolls and crashes alternating with full-on sprints before lumbering to a finale. The song titles themselves can give you a clue to the moods being explored. “Serpent Toungue[‘s]” guitars flit around the skittering percussion, while “Once Upon a Time” bathes in languid sheets of guitar phasers as Lally and Canty recall the rhythms of “23 Beats Off.” “The Inner Ocean” is a gentle drift through shimmering waves of varying guitar tones. Throughout the diverse set of instrumental temperaments, Lally’s unadorned bass guitar with Canty’s filling but not excessive percussion combine seamlessly with the various guitar affectations Pirog explores.

Is the album a success? It’s definitely a musical triumph. I’ll settle for any new music from this unassailable duo. Also, Pirog proves himself a force to be reckoned with and more than stakes his own identity to this debut collection. However, I can’t shake the end result that has me projecting a lyrical fantasia from Ian Mackaye and Guy Piccioto tackling drone warfare, the rise of the alt-right, the evolving American class divide, immigration intolerance, and the subversion of American politics into reality television. “Lockheed Lockheed Martin Marietta.”

Pissed Regardless: Feed the Birds [EP]