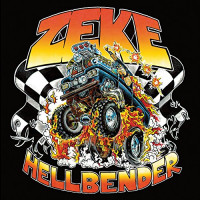 Zeke is back with their first album in 14 years, and they haven’t slowed down a bit. That’s not just some cliche’. It’s true in the most literal sense. Hellbender has two kinds of songs: fast songs and really fucking fast songs. Its 15 tracks clock in at under 21 minutes. No song reaches the two minute mark. A couple don’t even make the one minute mark. Still, they manage to wrap a double album’s worth of riffs and guitar solos in this relatively small package.

For those unaware, Zeke is quartet from Seattle that has been around since 1992. Their sound is a combination of hardcore punk and straight up rock and roll. They have made records for the biggest punk and metal labels. (Epitaph, Relapse) They are a direct musical descendent of Motӧrhead with their fuck you attitude and bluesy swagger. They are unapologetic about their love of fast cars (and motorcycles) and fast women. The cover art for Hellbender features an exaggerated, flaming monster truck with an arm hanging out the window holding an AK-47. (Surprisingly it’s not an AR-15, which there’s actually a song about.)

Opener “All the Way” sets the blistering pace. “Two Lane Blacktop”, “On the Road”, “Ride On” and “Redline” are all about the need for speed. “Working Man”, the title track, “Devil’s Night and “Big Rig” are among the catchiest songs on Hellbender. Zeke founder and main man ‘Blind’ Marky Felchtone has a raspy yell and spits out his lyrics out so fast that sometimes it’s hard to keep up. The return of OG bassist/wildman Kurt Kolfelt to the lineup also seems to give this comeback of sorts some extra credibility and guts.

Zeke isn’t likely to score any top 40 hits with this collection, but patient fans are going to love it. Artistry and nuance have their place, but so does kick ass, blue collar punk and roll. You can’t argue with the precision and sheer intensity of these songs. This record has all the subtlety of a concrete block to the head, and nobody does that style better than Zeke. It’s not for the pretentious, but Hellbender is a solid slab of speedrock.

Pissed Regardless: Feed the Birds [EP]