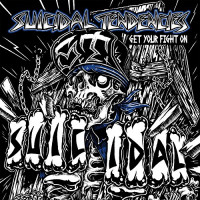 “Get Your Fight On!” was probably the best song on Suicidal Tendencies’ very solid 2016 album World Gone Mad. It’s as good a song as any to build a ‘fan club style EP’ around, whatever that’s supposed to mean. Get Your Fight On! Is actually 10 songs with a total run time of just over 45 minutes. It’s hardly an EP, at least by traditional standards. But before you get too excited, you should know what’s included. The first five tracks are new or leftover unreleased ST songs. The sixth track is a cover of the evergreen Stooges classic “I Got a Right”. (ST’s first ever official cover song.) The tenth and last song is the LP version of the title track. The other three songs are alternative versions of that same title track.

This release was also supposed to be a return to Suicidal Tendencies’ topical and political roots, which they largely abandoned 30 years ago. Opener “Nothing To Lose” is the best song on the EP and flat out rips. It seems destined to become an ST live mainstay. (If they were going to base another ‘fan club style EP’ around a tune from this one, it should definitely be this song.) “Get United” is much funkier, but still has occasional moments of pure thrash bliss. “Authority” never gets too heavy and is almost reminiscent of their most melodic album, The Art of Rebellion (1992). It also borrows a phrase from one of ST’s best songs, “You Can’t Bring Me Down” from Lights...Camera...Revolution! (1990). “Ain’t Mess’n Around” has a great rock and roll riff and references the Join the Army (1987) classic “You Got, I Want”. “S.E.D.” (systematic emotional destruction) features another memorable riff, and is the second best new song in the collection.

ST do “I Got a Right” justice by not screwing around with it too much. Their straightforward version is bound to be a mosh pit inducing crowd pleaser. “Get Your Right On!” is a mellow, almost acoustic take on the title track. It’s fairly uninspiring despite its inclusion of handclaps and some other funky percussion. “Get Your Bass On!” is a bass heavy (duh) instrumental version. It starts out like background music for The Weather Channel before kicking into gear toward the end. “Get Your Shred On!” is another instrumental version, this time featuring the lead guitar. (Dean Pleasants is a master shredder.) None of these remixes are horrible, but they don’t really merit repeated listens. When “Get Your Fight On!” finally plays, it comes as a welcome relief.

These tracks were recorded at different times with slightly different lineups, but they don’t feel at all disjointed. This is a cohesive package. The artwork is also a cool throwback to Suicidal Tendencies’ early punk era. This is kind of tricky to score. How do you judge an LP masquerading as an EP? Get Your Fight On! would undoubtedly be better if it were trimmed down to six or so songs, but do you punish a band for giving you too much? There is definitely enough good stuff here for an above average EP, but the second half drags it down. This is intended to keep Suicidal Tendencies fans happy while they’re waiting for the next full length. Ultimately, it should do just that.