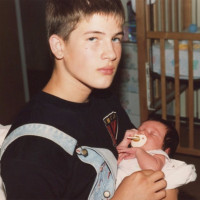 Big Thief benefits greatly from being hard to pin down to any single genre, and the artistic expectations implied therein. They have been praised by fans and critics alike for their indie rock cred along with their more classic folk tendencies, but the magnitude of variety in their music defies labels and checkboxes. Lead vocalist and songwriter Adrianne Lenker, guitarist Buck Meek, bassist Max Oleartchik, and drummer James Krivchenia together have created another opus to be proud of with Capacity, Big Thief’s aptly-titled sophomore LP. The album presents a series of musical vignettes that demonstrate their strength both as eleven separate tracks and as one collective whole. Every song depicts a different tonal and rhythmic landscape but offers an equally visceral listening experience.

“Pretty Things”, the album opener, contains an unanticipated acridity in its fingerpicking style and lyrical content. Lenker sings of feminine energy, its durability and its often conflagrant passion. Towards the middle of the tune the listener’s attention is drawn towards some muffled thumping in the background, a thunderous setting beyond the steadfast guitar plucking. Other instances of abstract instrumentation, percussion, and tone are peppered throughout the album, adorning the songs with unique character and structure. The outro of the title track “Capacity” features some idle feedback and guitar twang, the dreamy, OK Computer-esque buildup in “Great White Shark” ushers in a pulsating standoff between drums and dual guitar, and the exemplary “Shark Smile” starts with a haphazard jam that doesn’t resolve for nearly a minute into the track.

There is a reason that “Shark Smile” has garnered so much attention: the song is in a class all its own. It can mercilessly tug at your heartstrings while forcing your foot to tap along, and it begs for repeat listens. Driven by a simple yet effective drumbeat, partnered with a syncopated guitar à la “Lump Sum” by early Bon Iver. Lenker recounts a tale of love, loss, and misfortune in the midst of a tragic accident. Capacity is rife with themes of trauma, recovery, and retrospection, but they are discussed in ways that will appeal to fans of Hop Along or Iron and Wine. In particular, the seventh track and lead single “Mythological Beauty” hums with the clarity that one encounters during reflection on past turbulences, typified by a calm guitar that echoes Lenker’s meditative melody. Similarly, “Coma”, “Objects”, and the swinging closer “Black Diamonds” possess instrumentation and dynamics that tonally mirror the haziness, aggression, and contemplation found in the miniature worlds that navigate the record.

Capacity is a testament to Big Thief’s flair for songwriting, arrangement, and the sonic reflection of myriad human experiences. A beautiful irony exists in the fact that Capacity, with its impeccable artistry, followed hot on the heels of Masterpiece, the band’s debut record in 2016.

Suicidal Tendencies: Get Your Fight On!