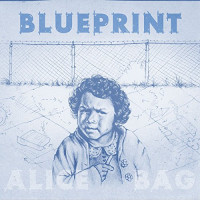 Alice Bag established her place within the early punk scene by being one of the first females in the male dominated space with her late ‘70s Los Angeles band the Bags. Despite a sparse recorded output, the band was featured significantly in Penelope Spheeris’s The Decline of Western Civilization. In addition to her musical career, Bag has gone on to perform work in Nicaragua, finished college, and spent some time teaching elementary school. She has also published two memoirs about her time as a female frontwoman in a punk band and documenting her time in Nicaragua in Violence Girl (2011) and Pipe Bomb for the Soul (2015) respectively. She returned to music with her eponymous debut on Don Giovanni in 2016 and returns just in time to continue to give voice to the cultural shifts of 2018 with Blueprint.

Bag’s new album was recorded at Echo Park’s Station House Studios and features a diverse cadre of musicians from groups like Mars Volta, The Mumps, Deadbeats, and Social Distortion that create a sonic miasma of reverb drenched guitars, ivory bounce, and occasional bleating horns. Blueprint’s lead track “Turn It Up” urges the listener “to play something new instead” with chugging guitar accompanied by some melodic piano counterpoint that recalls Patti Smith Group. The album flits between various California rock sounds throughout its running time. “Invisible” coasts on some shimmering surf guitar lines backed by doo-wop choral backups. In addition to the wipeout guitars, “Stranger” and “Blueprint” bring in some Orange County brass while “Shame Game” rides a low-end piano groove to brighten this feminist dance party. Throughout the album, Bag displays an impressive vocal range as she emotes on the plaintive ballad “Adrift” but rages and spits on the defiant “77.”

Blueprint is also a collaborative effort that reunites former and current riot grrrls behind a common purpose with Bag at the lead. In the music video for “77,” Bag is joined by Kathleen Hanna (Bikini Kill, The Julie Ruin), Allison Wolfe (Bratmobile, Sex Stains) with a cameo by Shirley Manson (Garbage) for a low budget spoof on the Dolly Parton classic 9 to 5 to rail against the injustice of women getting paid 77 cents on the dollar compared to men. The sound of the single evokes the early grime of 1977-era CBGBs as the ladies bluntly proclaim their disgust: “You’re head of household, well so am I / It’s not just about me, I need to provide.” Teri Gender Bender (Le Butcherettes and Crystal Fairy) and Francisca Valenzuela lend some vocal support in “Se Cree Joven” (translated “She thinks she’s young”) as Bag defends herself against a coterie of critical young women commenting on her appearance. The accompanying video is a comical thrift store shopping spree that proves individualist fashion and self-actualization are not beholden to age.

Ultimately, it’s Blueprint’s title track that threads the common purpose through this resistance rock. Bag acknowledges that despite the best of plans it is essential to stay flexible while pursuing an agenda with the repeated mantra to “keep it on track.” Expounding on the metaphor, she muses that “things come up as you’re building a structure and force you in different directions, but you still have to make sure that it turns out the way you envisioned.” Alice Bag’s vision is successfully accomplished on this enjoyable collaborative effort that marries bouncy rock to progressive politics.