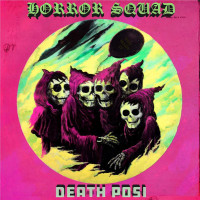 In a world where polished pop punk bands are a dime a dozen, Chino, California’s Horror Squad have gone in a different direction with the sub-genre. The band’s newest full-length Death Posi is a very fun and surprisingly gritty melodic punk album.

In the track “Pints Of Blood” the choppy guitars and the way that a lighter vocalist backs up the deeper lead vocalist definitely gives the tune a Dillinger Four quality to it believe it or not. The intro of “Love Bug ’68” alludes the early “doo whop” days of rock n roll and then it jumps forward serval decades and quickly turns into a modern, power-heavy pop punk song. Once they band hits makes it to the chorus instead of backing up the lead singer with the chords the guitarist follows his vocals with these screaming Chuck Berry-esque bends instead. The tenth and last track, “Flowers.” The much more bass-heavy than the others songs on the album. It leans much more on the garage rock side of things with fuzzy musical transitions and bass-centric and slower verses.

With Death Posi, Horror Squad uniquely and creatively managed to incorporate some of what made early rock n roll great into their contemporary pop-punk style. Fans of Teenage Bottlerocket, Mean Jeans, Dirty Fences and Masked Intruder should definitely give this album a shot if they haven’t already.

Note: If you get the physical version of Death Posi you will see a great little homage to the now-closed DIY Pomona, CA venue VLHS on the back cover. RIP VLHS.