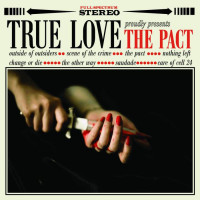 Falling somewhere between A Life Less Plagued and Lowest of the Low, True Love's newest LP, The Pact, is proof that a nearly flawless recording can be composed of the barest of essentials. If you know what you're doing, the less ingredients you put in, the more potent the mixture.

Save for track seven ("Suadade") a pretty instrumental that clocks in at fifty-eight seconds, there isn't an ounce of fat on this record. The Pact is hardcore personified, fine-tuned and boiled down to perfection.

Holding high the torch of early 2000's hardcore from Boston and beyond, True Love rips through their latest with a ferocity I haven't heard in years. Seven hardcore ragers with the occasional heavy break in the vein of Right Brigade, Carry On, and early Terror. I've heard a lot of people throwing around a (somewhat) lazy American Nightmare comparison, but True Love's sound is too burly, too relentless, too focused for that to be accurate.

Fans of the the band's earlier material - which was more of the "all go, no slow" variety - can look forward to enjoying just a slight departure from that. We'll call it "all go, some slow." Indeed, the closer, "Care of Cell 24," might be the band's heaviest tune yet. It dissolves from a fast, punk beat into a chugging beatdown, and then drops further into an even beefier break. Vocally, the band delivers and then some: strong mid-range yelling that never goes too high or too low.

The Pact is a short listen, but this only makes the experience more memorable. True Love has released an impeccable hardcore record - another feather in Triple-B's (at this point) overflowing cap. And man was it awesome to hear a vocalist scream, "One, two, fuck you!" again. I haven't heard that one in years.